The couple behind Homing Humans has embraced a home renovation journey filled with colourful twists and turns. From making spontaneous design decisions to finding positives in tiling imperfections and assembling an eclectic collection of pre-loved furniture, their home is an exercise in bricolage.

Their process speaks to their quest to align their home with their personal philosophies, which include sustainability and versatility. Stick around to find out about their experience forgoing an overly structured process, hunting for pre-loved finds, and building a cat-friendly home under the supervision of feline family member, Ducky. 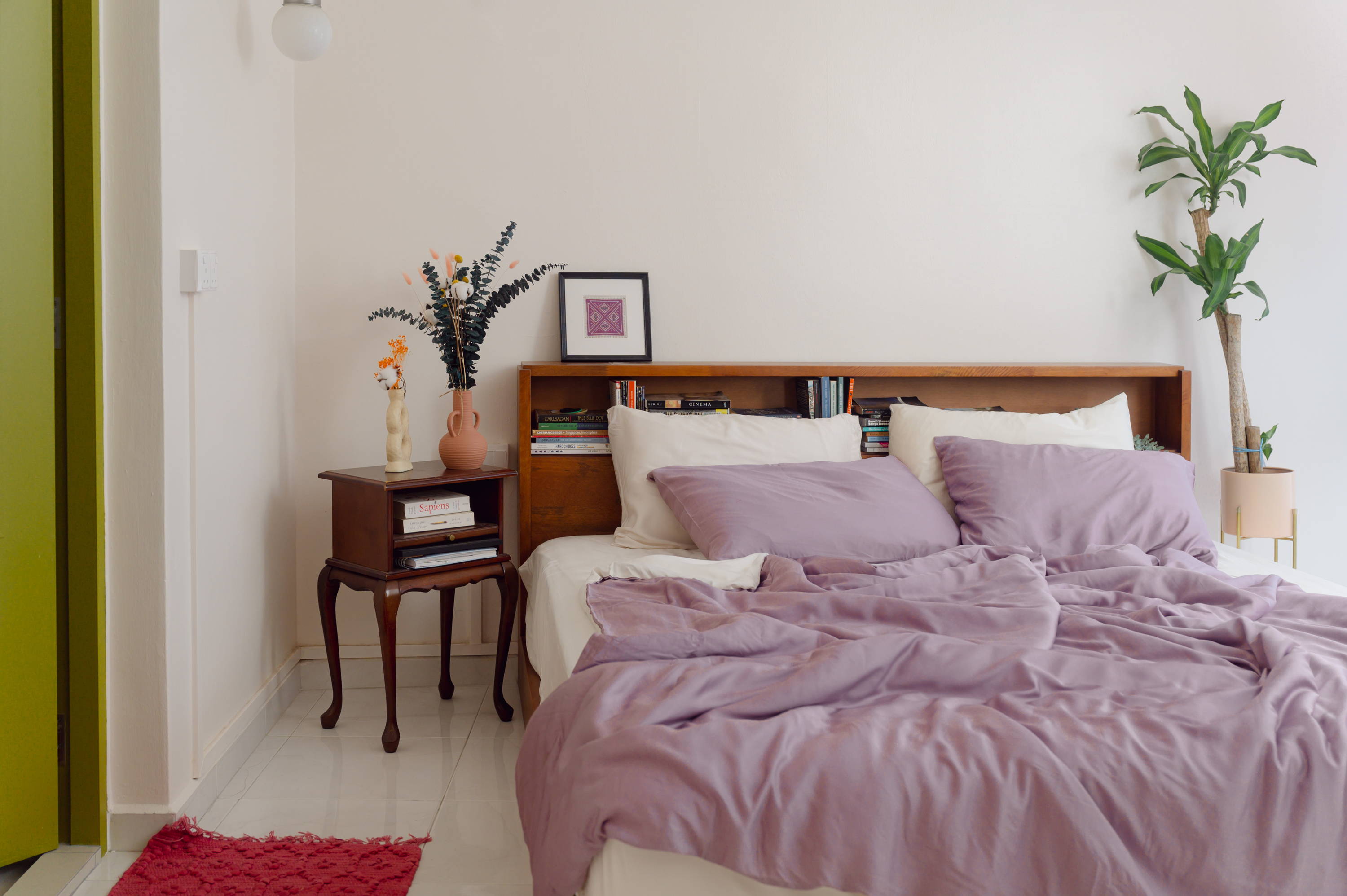 An assortment of furniture and décor come together for a cosy bedroom space. 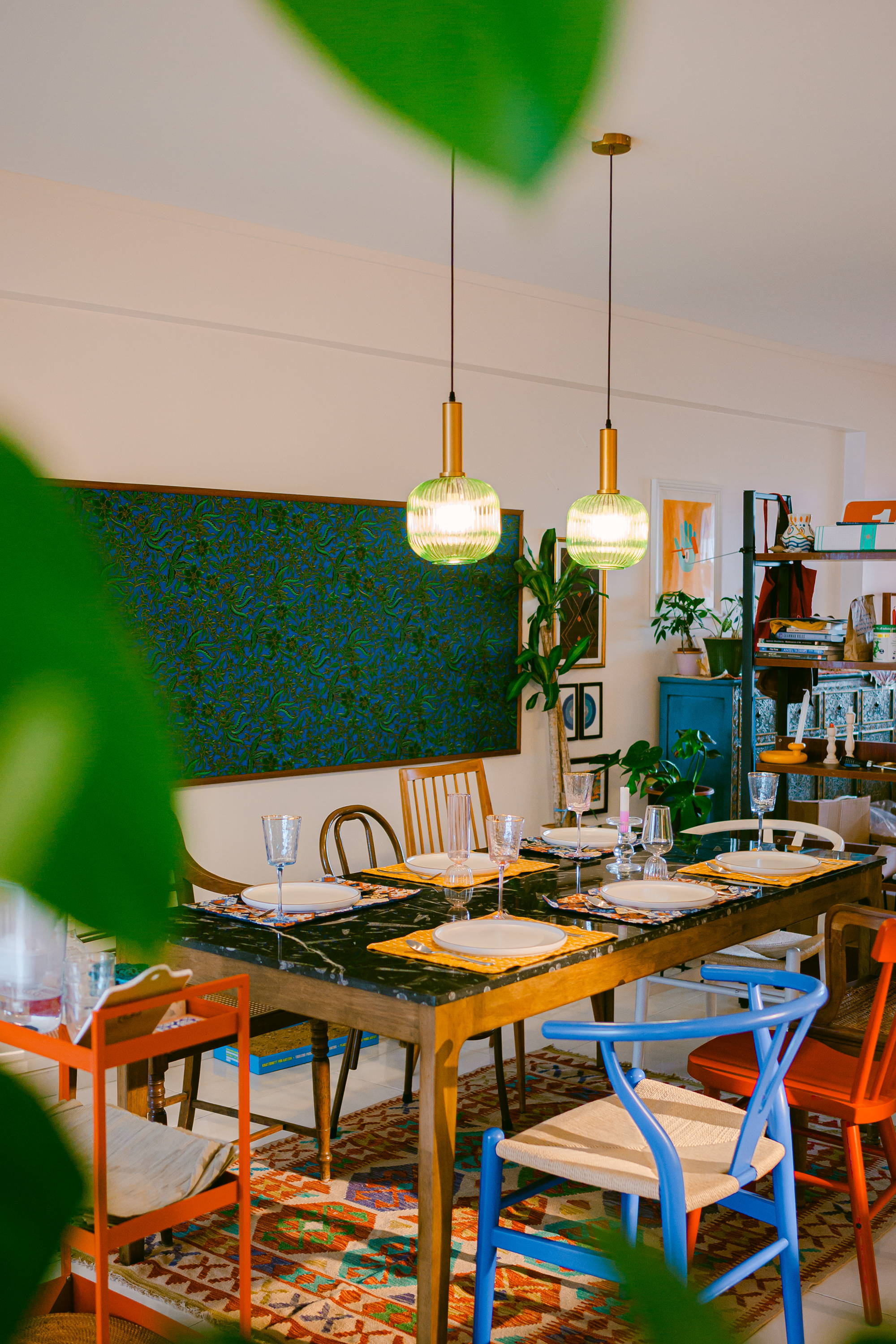 A glimpse into a home ‘fuelled by brain funk’. 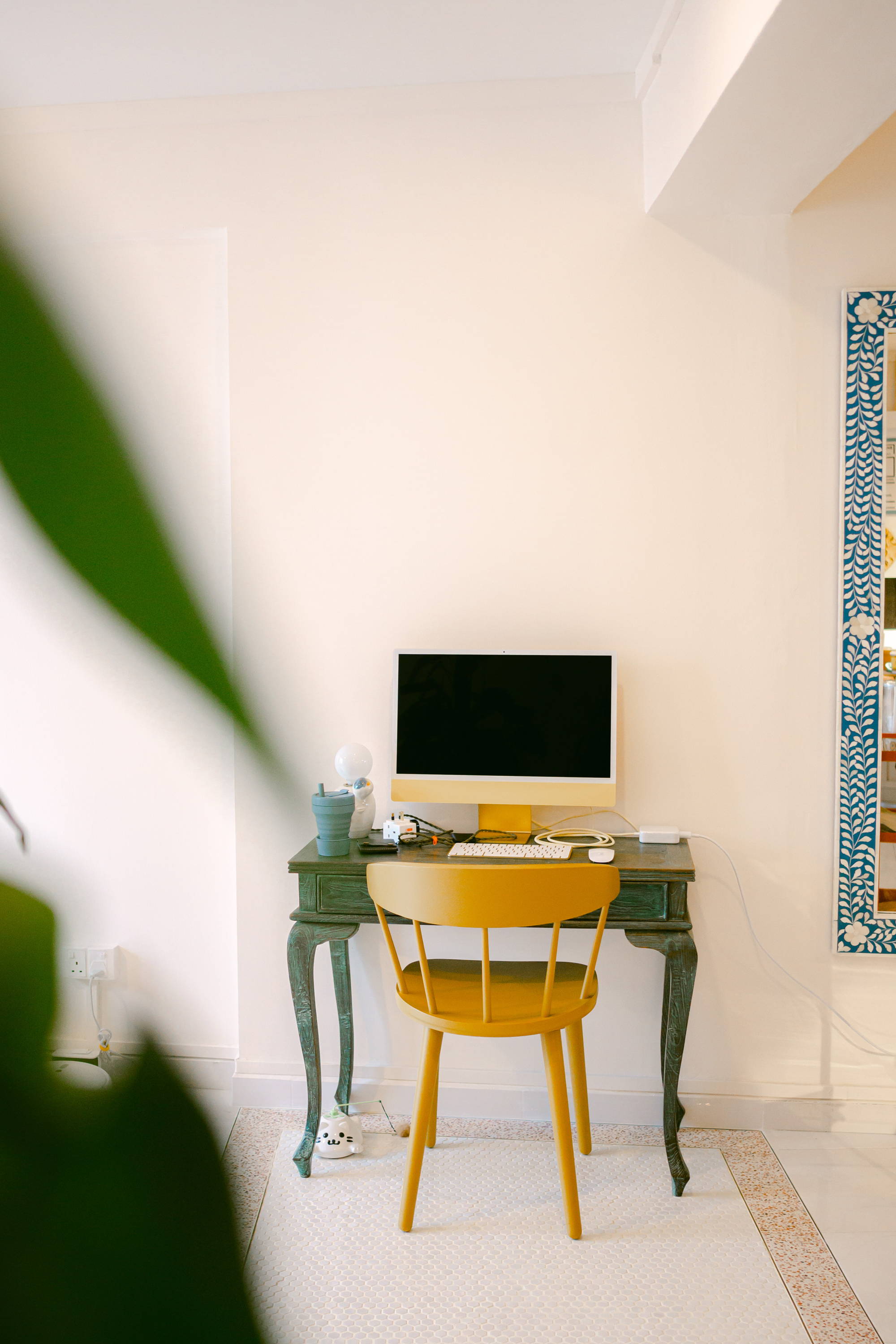 Sunny yellow and teal brighten up the workspace. Who said work had to be dull?

Your home is ‘fuelled by brain funk, all mistakes ours’. Tell us about that.

Funny thing is, when we planned for the renovation, we thought the house would only feature 3 primary colours. Look how that turned out! That to us is brain funk: not having a coherent, overarching aesthetic vision, and making key decisions along the way. We didn’t have an interior designer, so no structured process either.

Instead, we were guided by a philosophy of how we wanted to live, and what we didn’t want. Some of our philosophies include: sustainability, natural lighting, cosiness, un-encumbrance, future-proofing. But this also meant a lot of trial and error, internalising risk in areas where we weren’t sure about, and being responsible for them. So all mistakes ours! 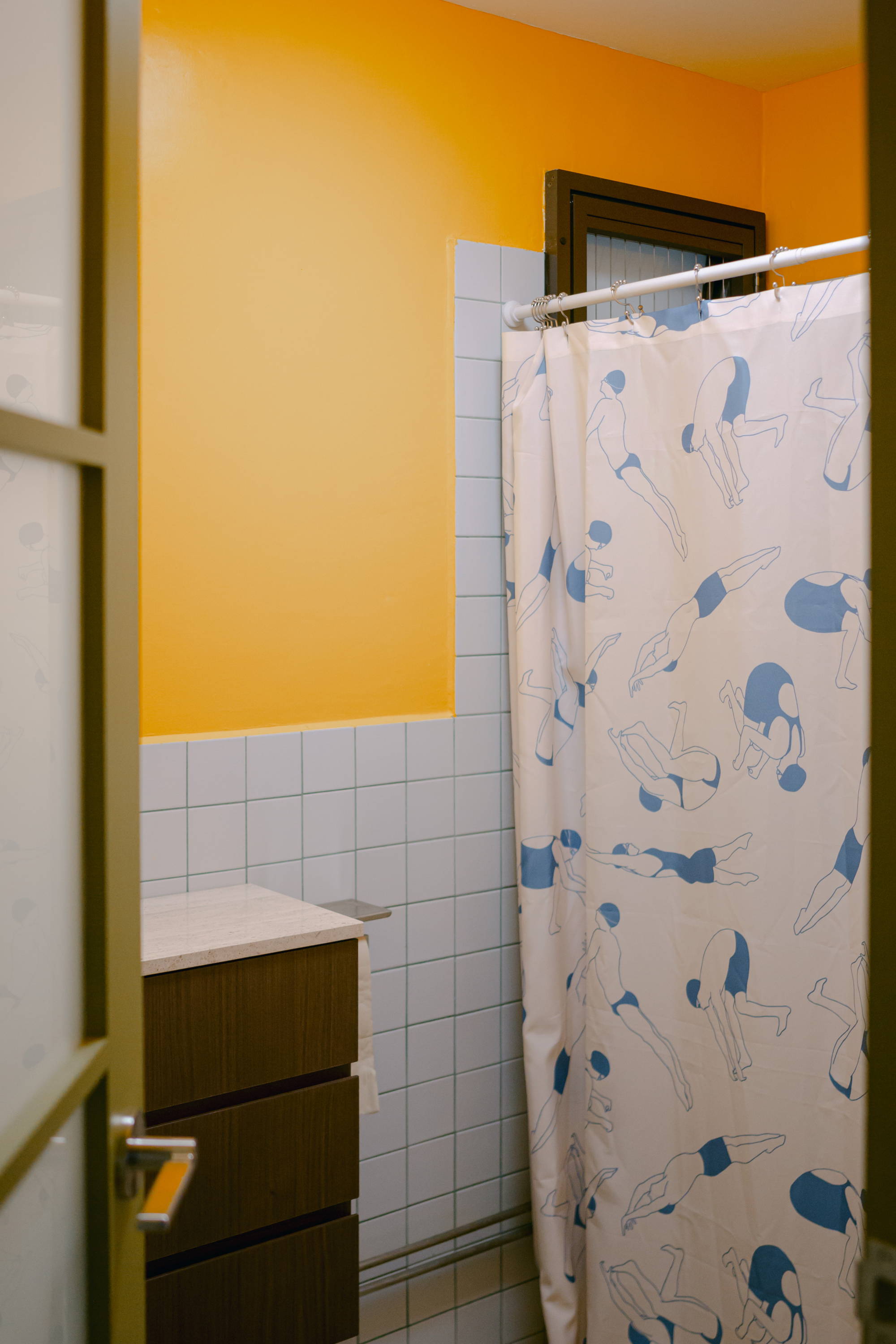 Bright pops of colour, like the yellow walls and green tile grout in the bathroom, were among the snap decisions made. 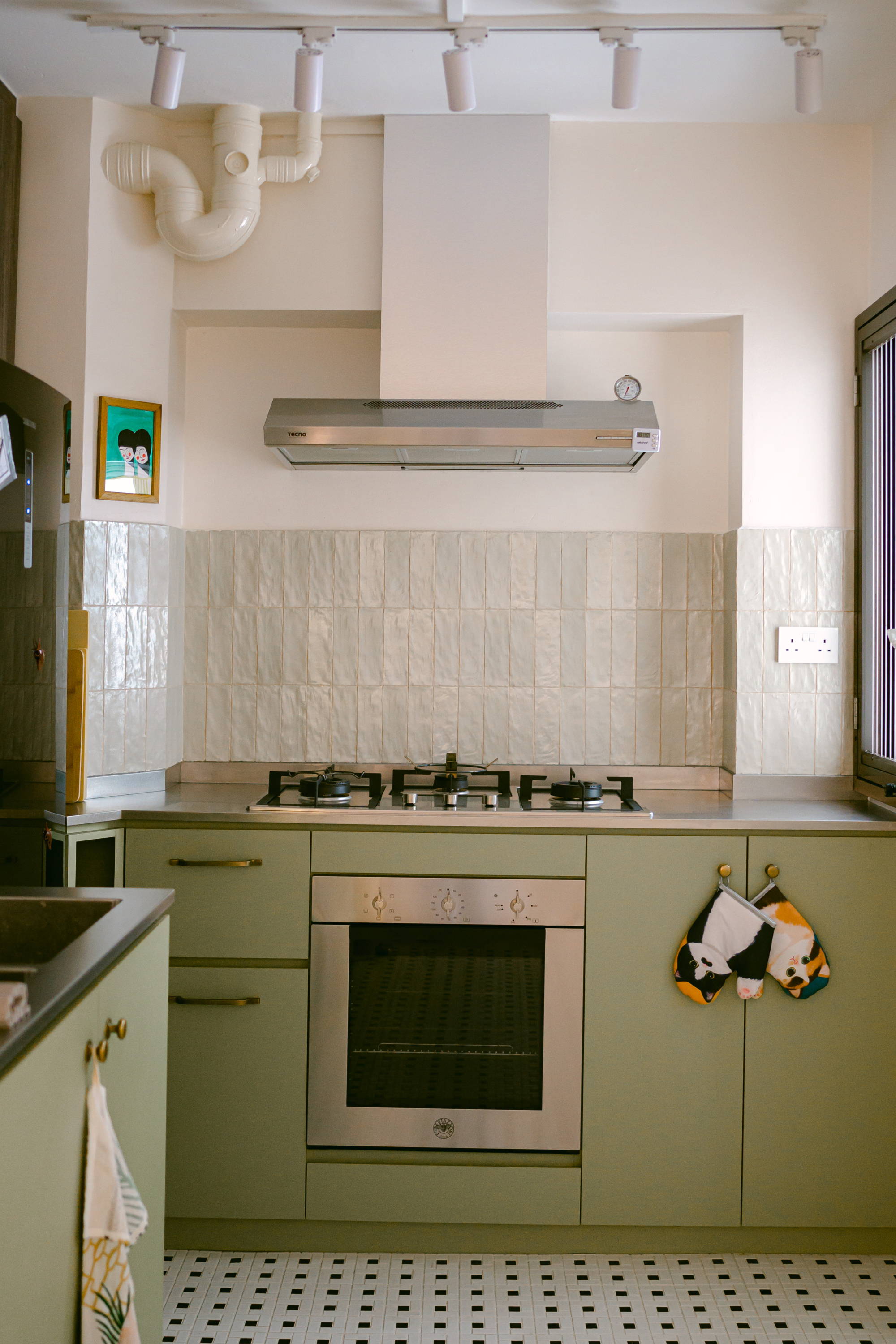 The sage green colour of the kitchen cabinets was a last-minute choice, but complements the pearly backsplash tiles beautifully.

What did you spend the most time deliberating on, and what were some of the snap decisions you made? Anything you would have done differently in hindsight?

The thing we spent the most time on is rather unassuming — the electrical plan. It was difficult because the electrical plan would limit where things can go. This was thus against our philosophy of un-encumbrance, because we wanted to be able to shift things around the house as and when we like.

Snap decisions we made: colour of things in the house, such as in the toilet and kitchen. A lot of our furniture was also decided on at breakneck speed, because most of them are pre-loved. Once we see a good offer, we tend to decide quite quickly. We also made an offer for the house on the day we viewed it, so that would be a snap decision as well. 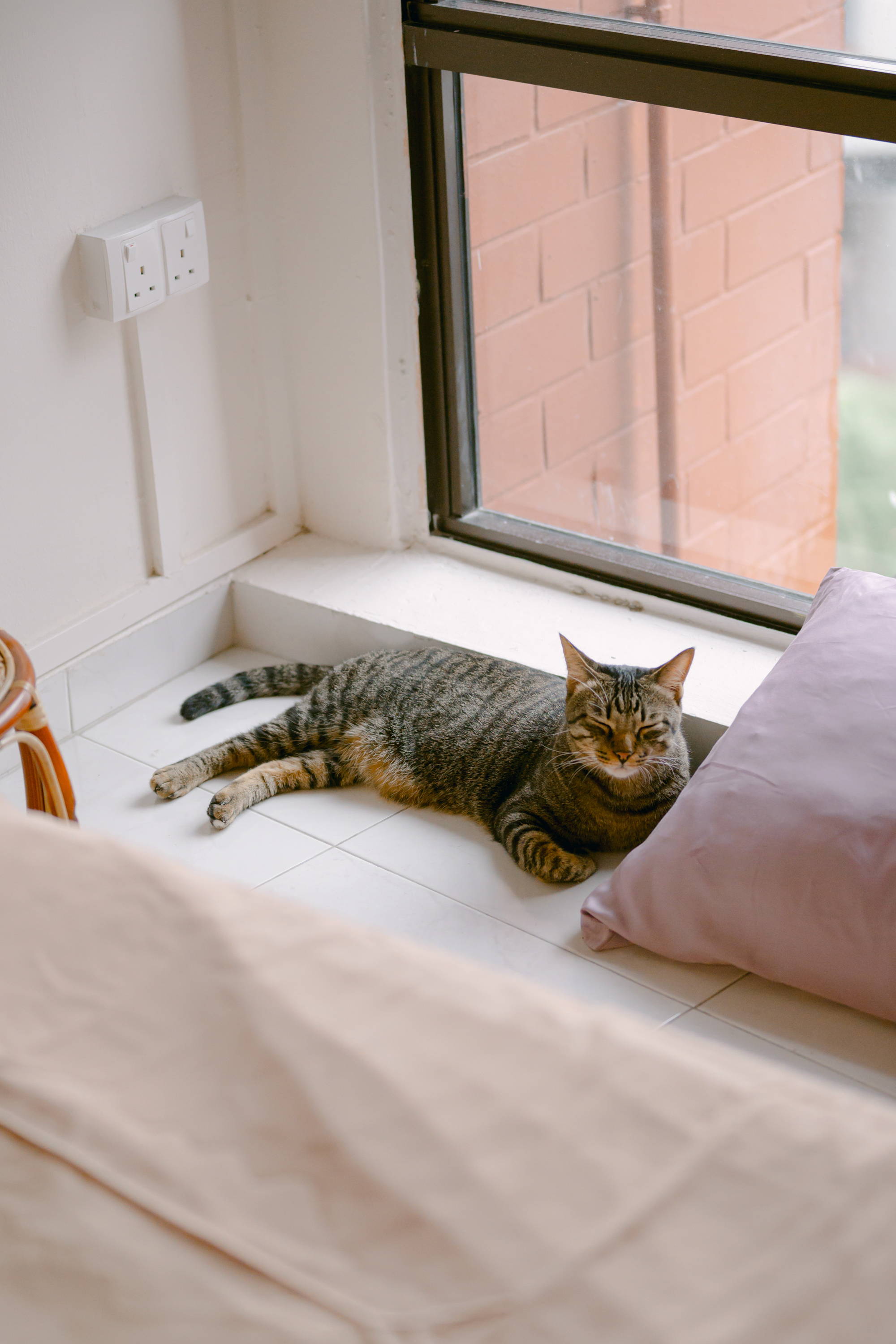 Ducky having a leisurely lounge by the window. 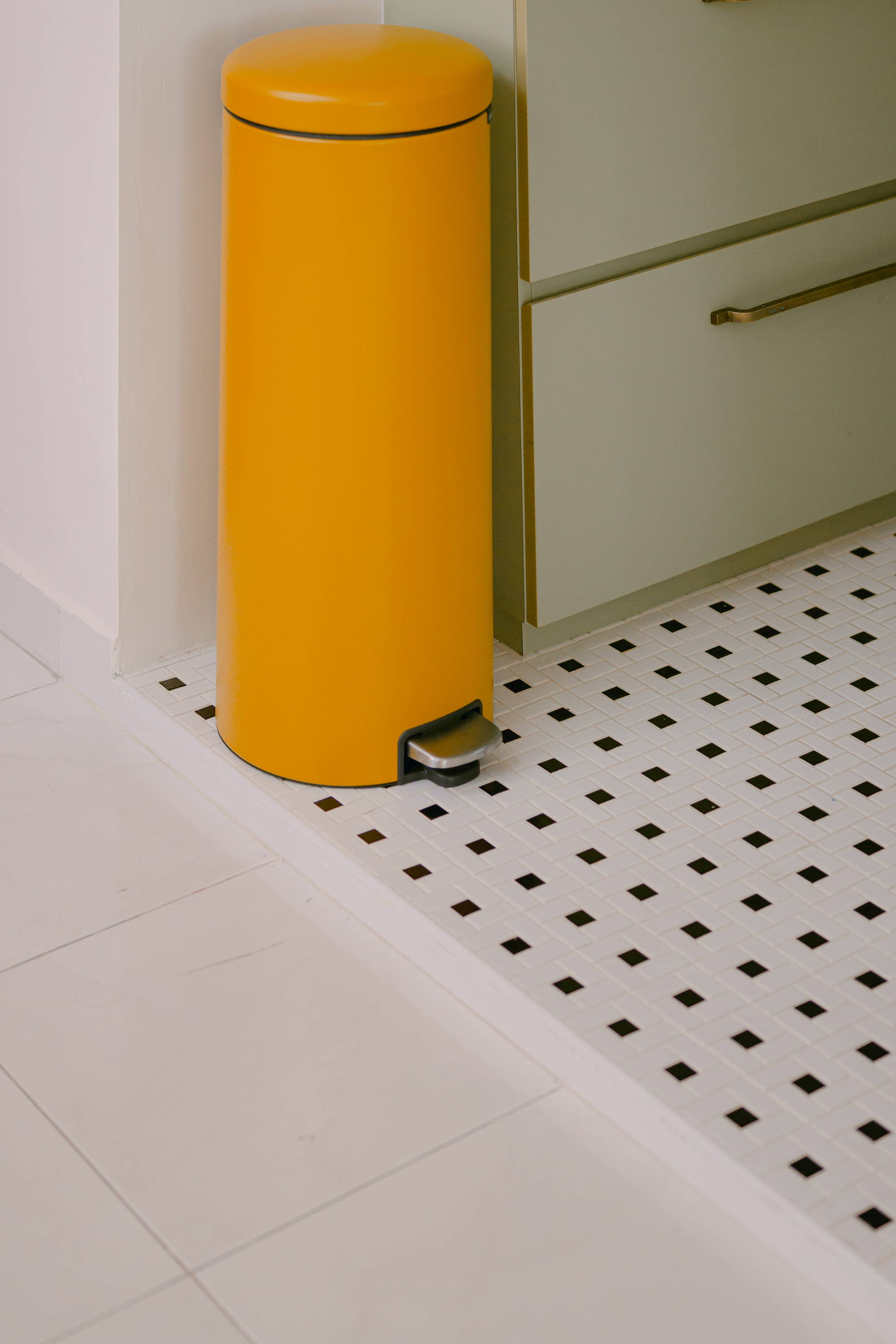 Homing Humans love the look of the mosaic tiles on their kitchen floor, but cleaning them can be a bother. 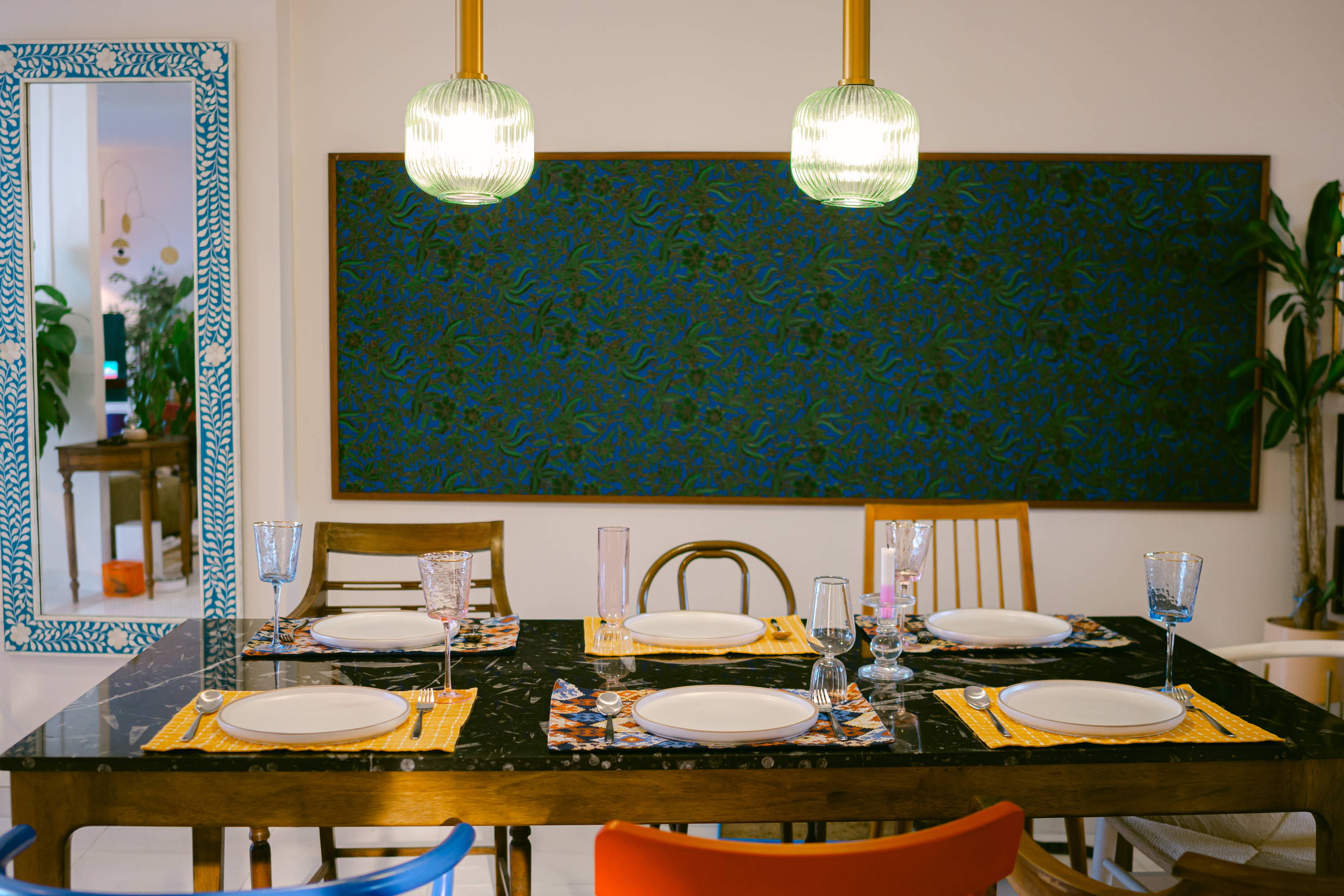 A mix of distinctive pieces of furniture and finishes, like their dining chairs and glassware, create a combination unique to their home.

You have such an eclectic mix of finishes and furniture, many of which are pre-loved. Why pre-loved, and what advice do you have on sourcing and putting together unique pieces?

Thank you! It is likely because we have a mix of so many things in the house that it would be hard for something to look out-of-place.

We went to a few antique dealers to get a flavour of the various styles of furniture available, but we sourced a lot of our furniture on Carousell. We bought pre-loved because it is aligned to our philosophy of generating less waste — the renovation process creates a lot of waste, so we tried to be mindful of cutting down where possible. Pre-loved also gives us the latitude to mix and match — newer furniture generally reflects the era’s zeitgeist, but pre-loved and older furniture tend to come with their own style and history, which we appreciate.

One philosophy on sourcing is that we don’t get too attached to an item, though once we see something we really like, we act fast. We would also encourage other homeowners to work within your budget.

"Funny thing is, when we planned for the renovation, we thought the house would only feature 3 primary colours. Look how that turned out!" 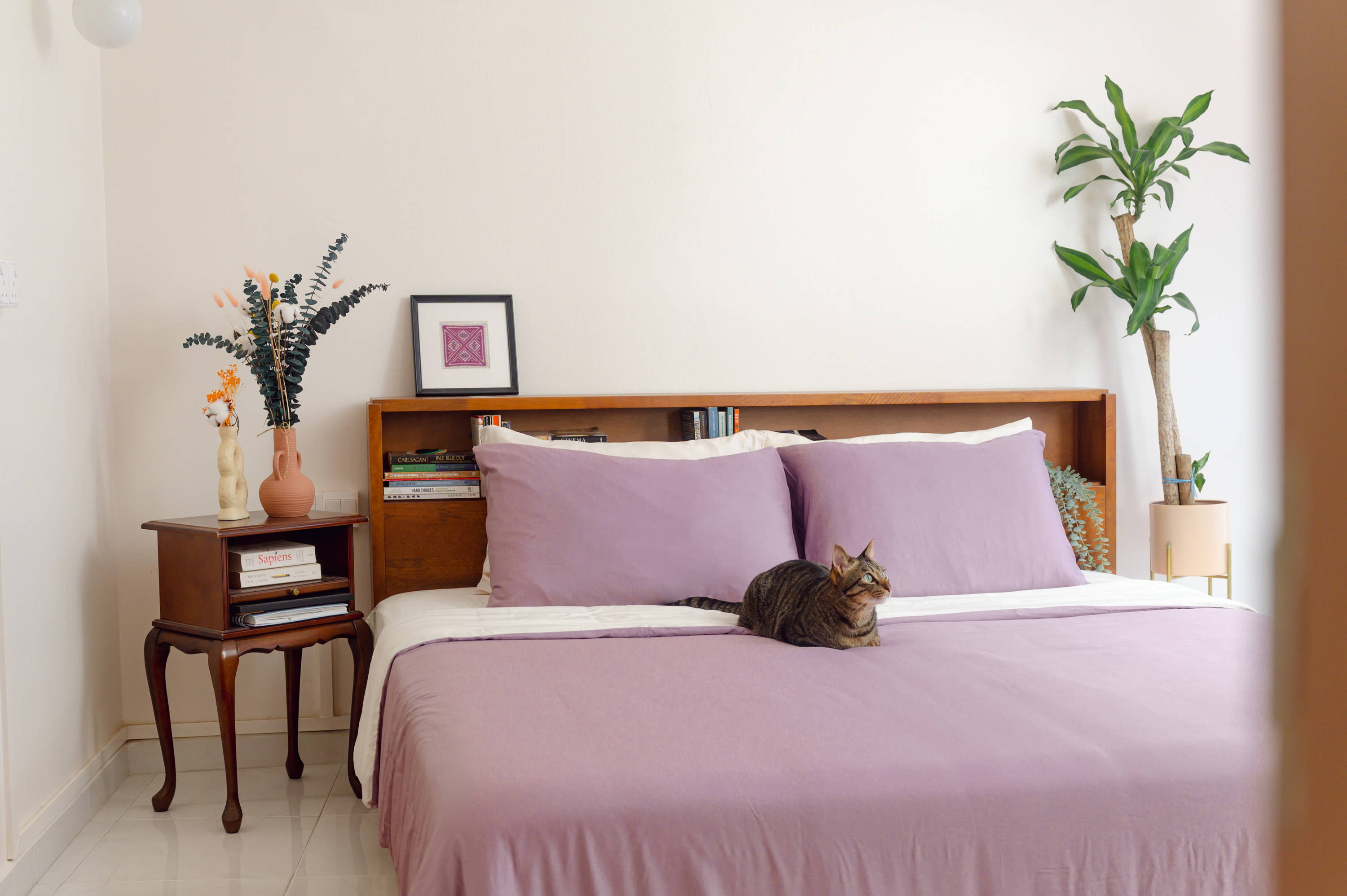 Ducky enjoying a freshly made bed.

Tell us a little about Ducky and how he came into your lives. Was there anything special you had to consider with having a feline supervisor around?

Ducky adopted us in February last year; he is our serendipitous COVID-19 cat, because he came to our home shortly before circuit breaker. He’s affectionate, obliging, and a source of comfort for us. He’s also a great communicator!

In terms of cat-friendly tips, one thing we did was to include grills in our house. It’s first and foremost for the safety of the cat (without him, we would have probably done without the grills). We also added a cat-flap for the master bedroom door, for Ducky’s convenience.

In terms of home décor or furniture — we went without fragile ornamental pieces, but other than that we’ve been pretty liberal in our choices. 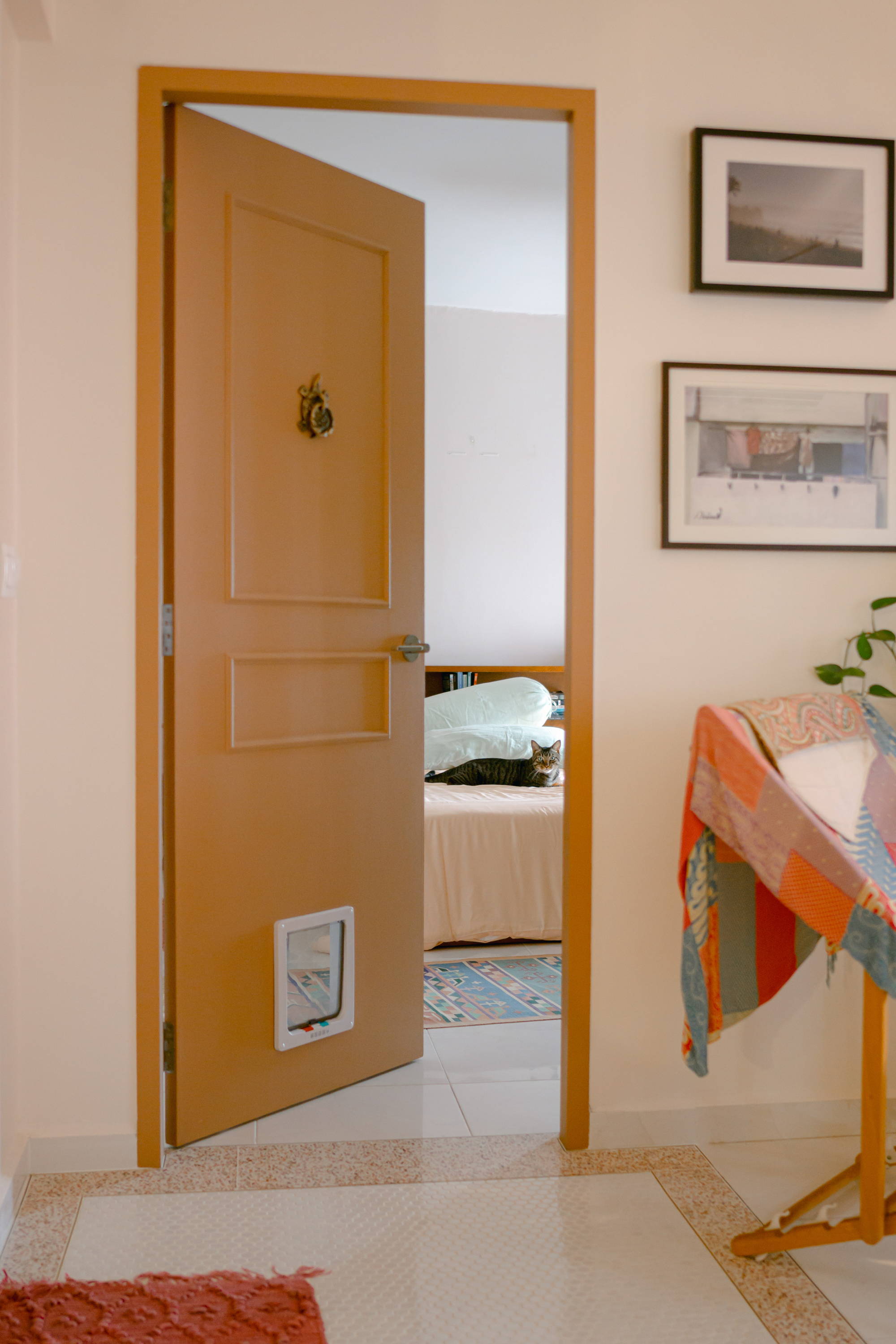 The cat-flap is Ducky’s custom entrance into the master bedroom. 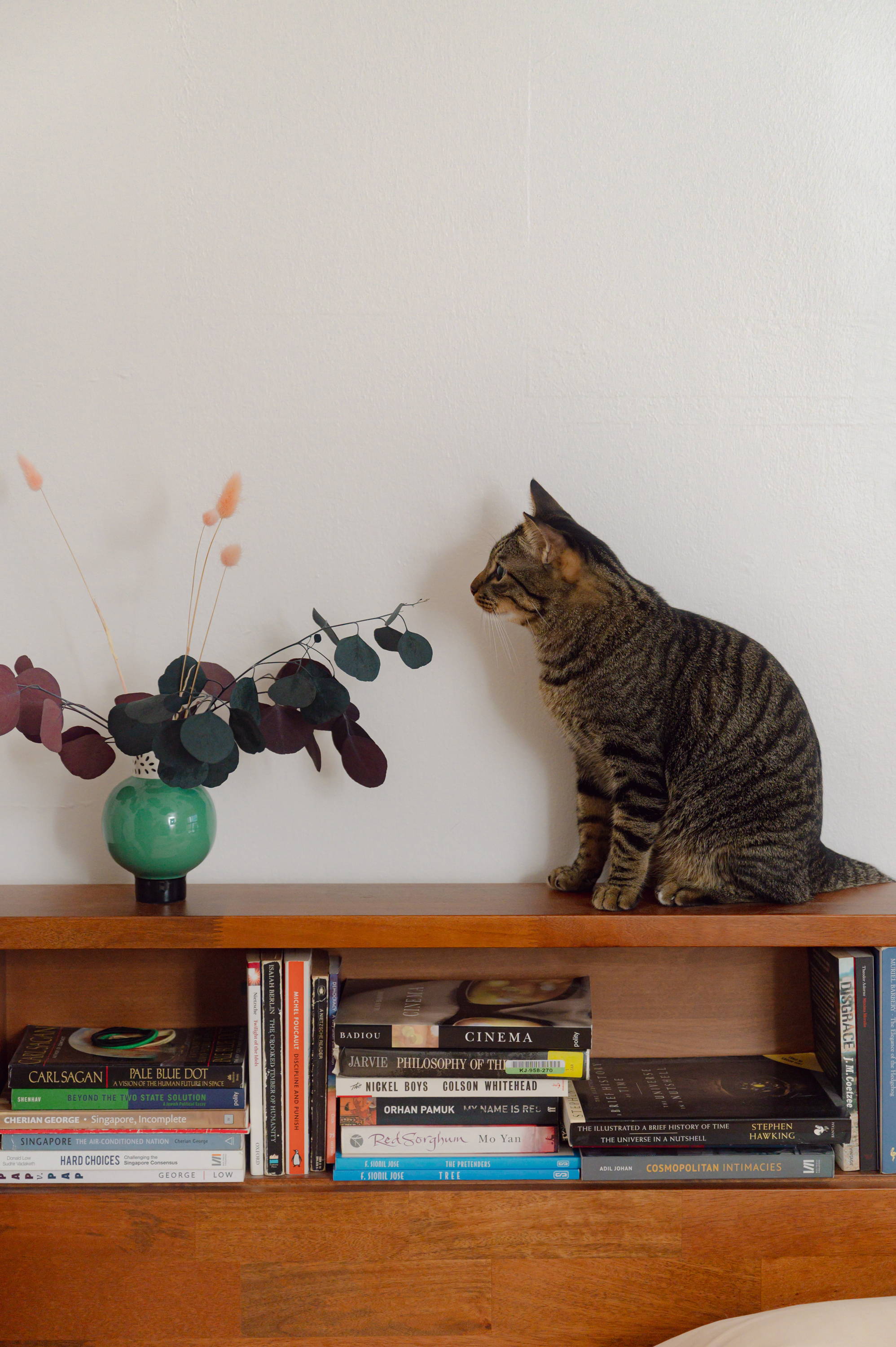 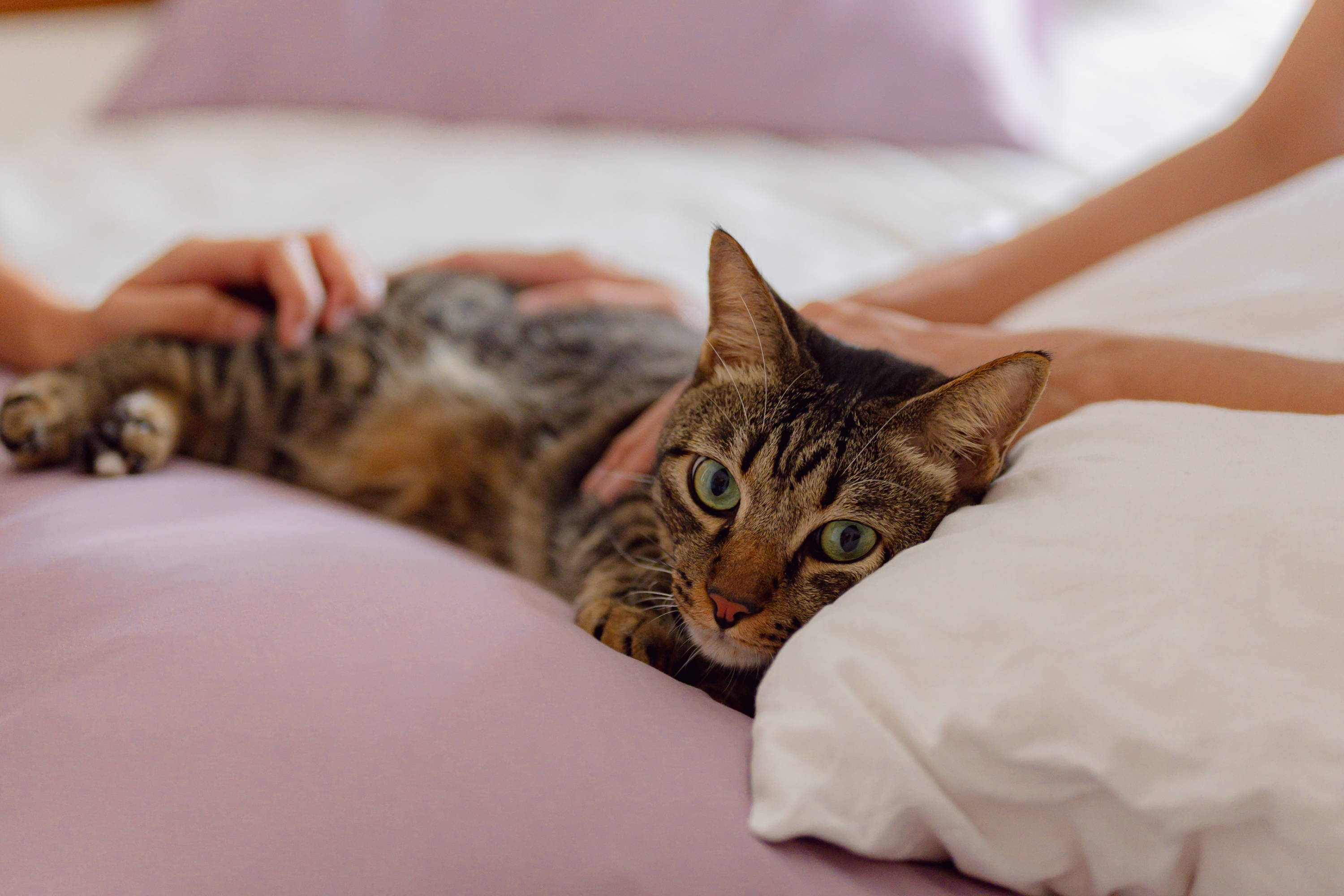 Supervising home renovations is hard work! Ducky appreciates a snuggle in bed with his humans after a long day. 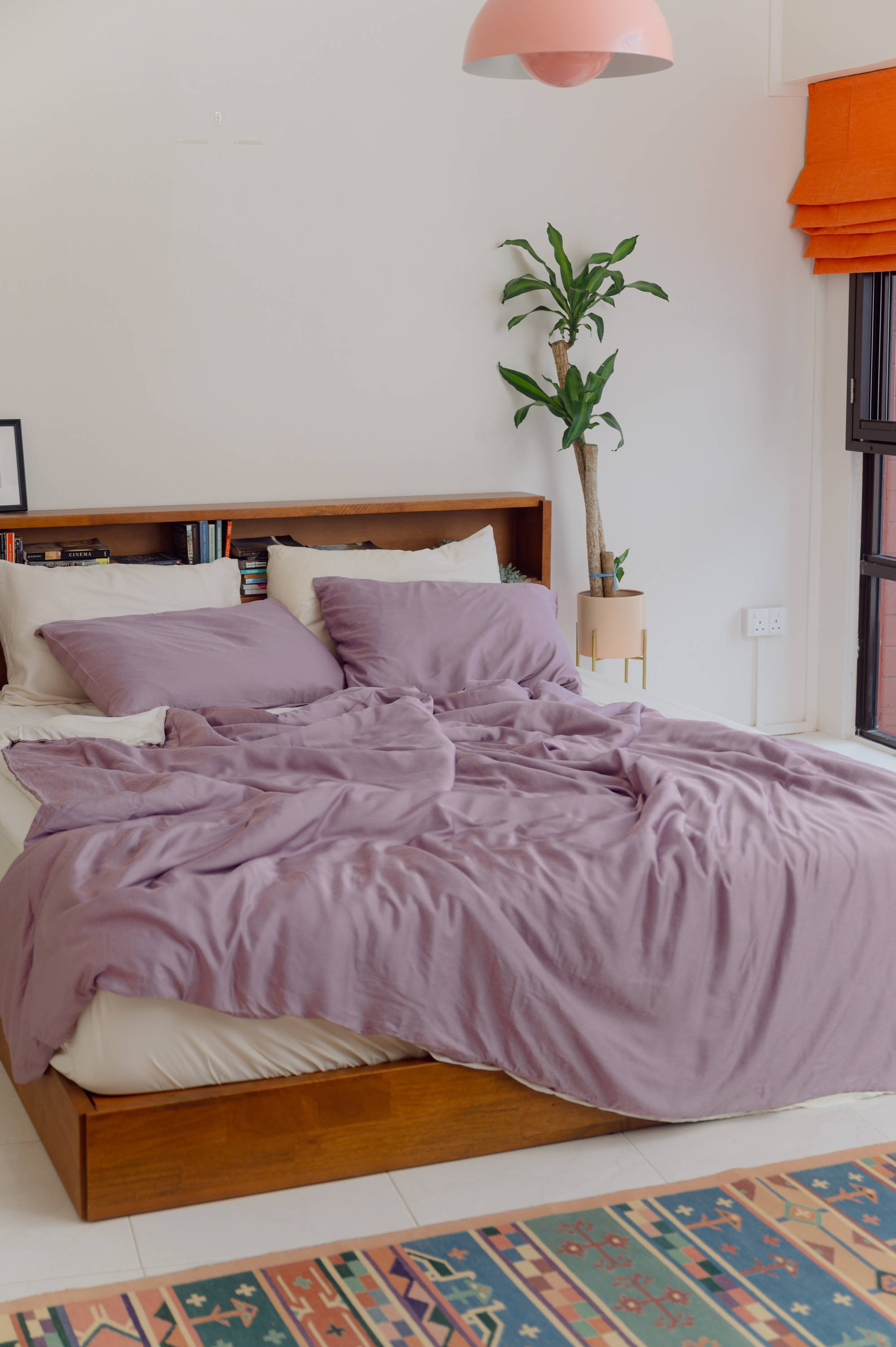