As romantic as it may first sound, moving in with your significant other is probably one of those decisions that will make or break your relationship.

In the first of a series chronicling the experiences of couples living together, we peek into the journey of Aadil Baggia and Natasha Zainal. Introduced by chance through friends, then brought together by yet another chance encounter on a dating app, the couple decided to move in together about a year into their relationship. We caught up with them at their home to find out more about what they’ve learnt so far — from the good to the bad and the surprising. 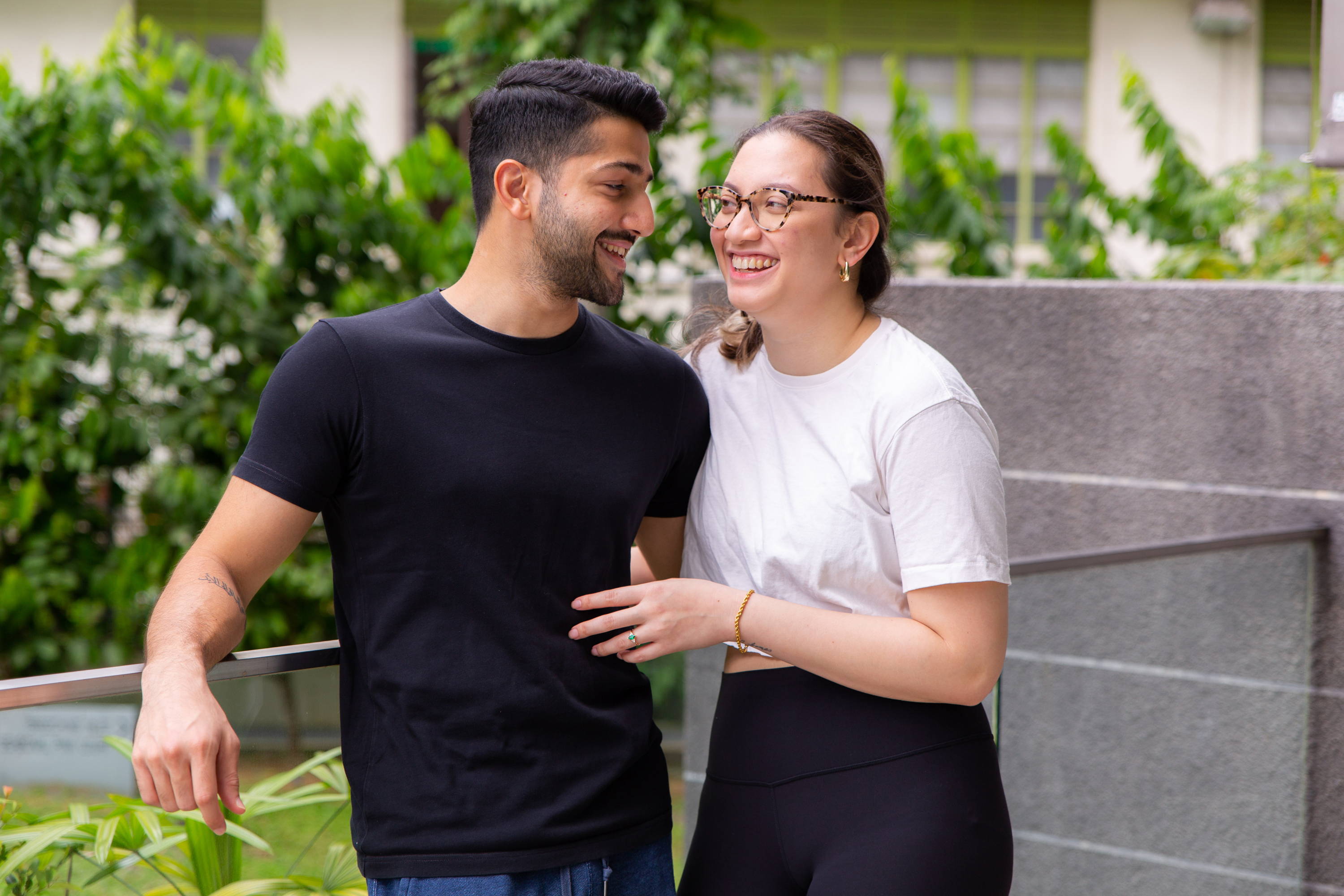 Aadil and Natasha in the balcony of their house, which they moved into early last year.

What made you decide to move in together?

Natasha: Privacy was the most important factor. We had both lived on our own before and we appreciated being independent from our families. Living apart from our families improved our relationship with them and brought us closer.

What have been some of the best parts about living together?

Natasha: Aadil is a great cook. He’s always testing new recipes and I happily volunteer to try everything. We have a running joke about him being pest control too because he gets rid of all the bugs that come in since we’re on the first floor.

Aadil: Being able to share a space that’s just for us is also lovely. Waking up and coming home together always brings a nice warm feeling. Plus, Tash is also a great planner. Groceries, restaurant reservations, or running out of toothpaste is something I never have to worry about. 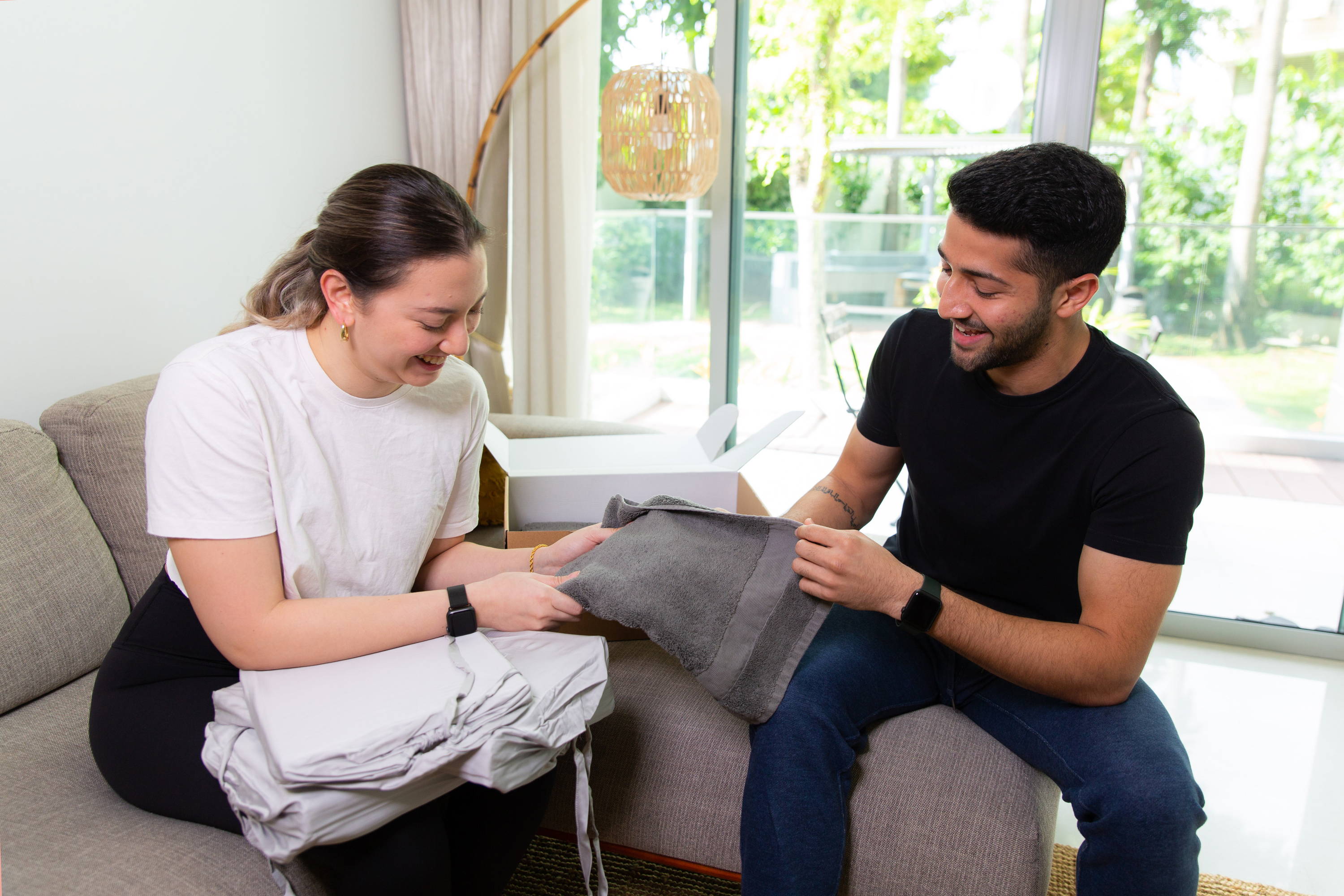 The pair checking out our new Move-in Bundle, featuring our Sunday Towels in Midnight Grey and Cloudy Grey sheets in bamboo sateen. 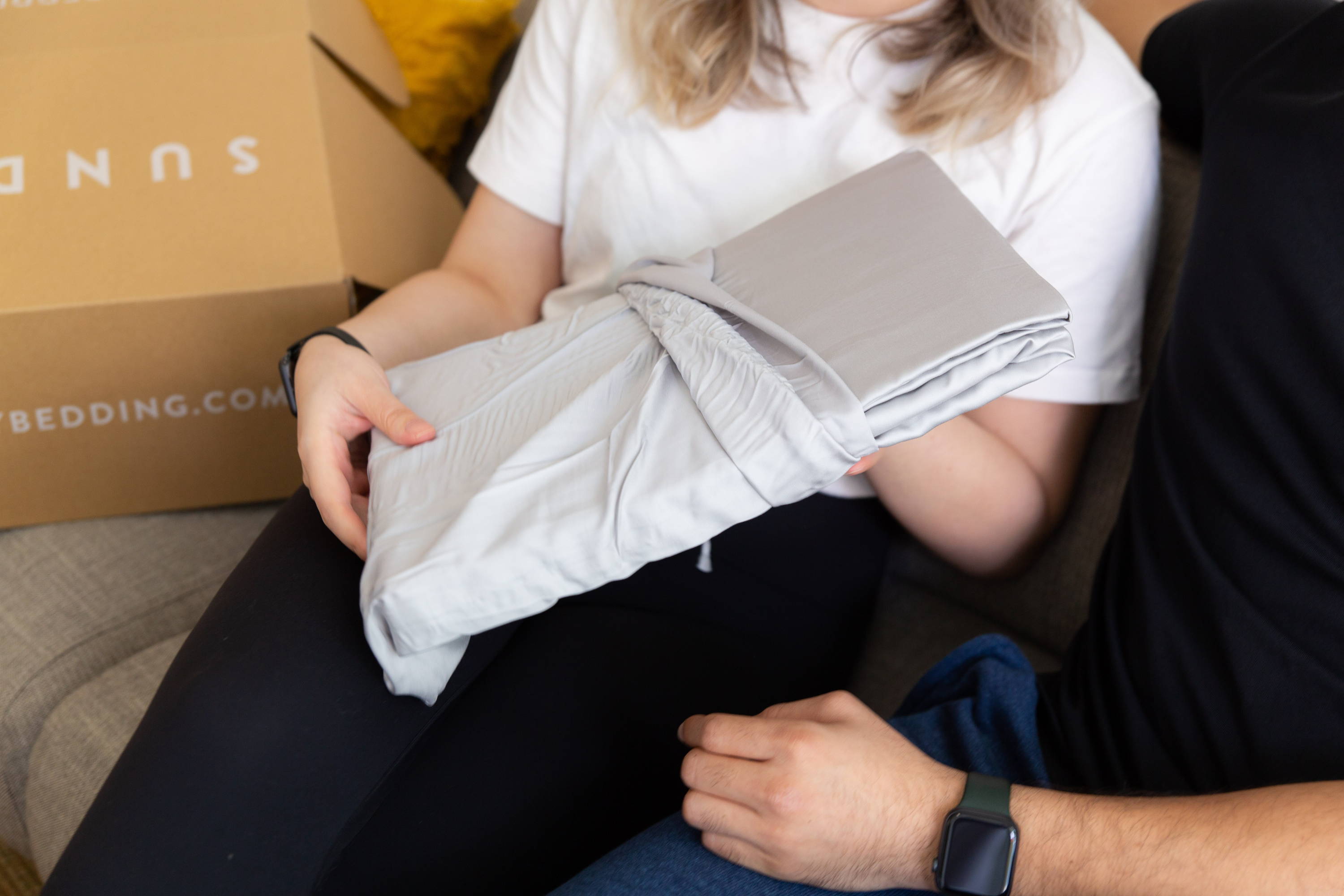 Name one new thing you learnt about each other only after moving in together.

Natasha: I didn’t know how easily Aadil’s insomnia could be triggered. So now I don’t allow any screens in bed and it’s worked wonders!

Aadil: I was surprised at how much Tash believes in Chinese remedies. I’m now a convert. Yu Yee Oil is our go-to for tummy aches. 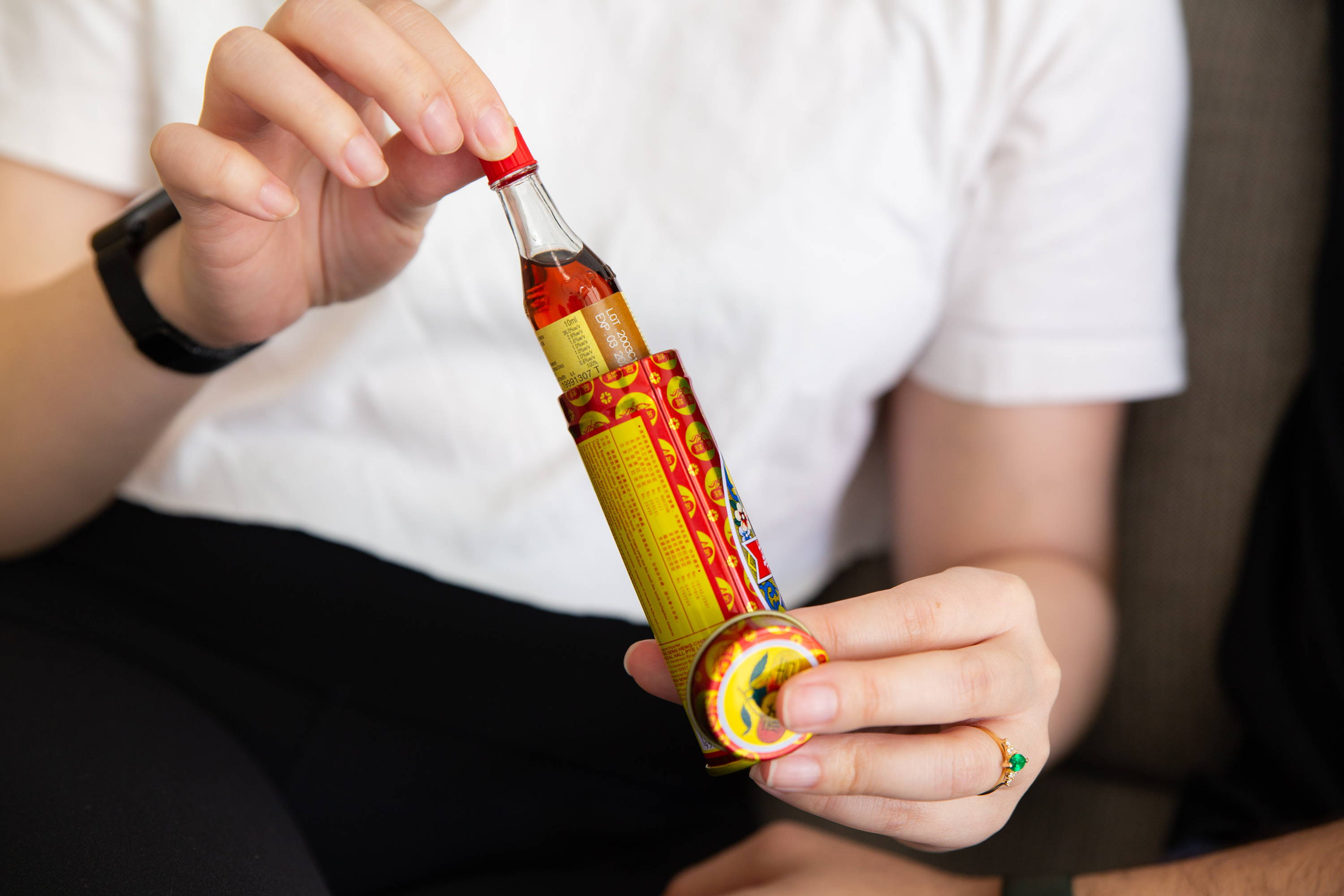 How about some of the challenges of learning to live with each other?

Natasha: Aadil is a neat freak — he doesn’t like to see things lying around where they don’t belong. I’m more of an organised mess kind of person, so it was hard to adjust at the beginning. But travelling together before moving in helped. Our trips were quite long, so we were already familiar with each other's standard of neatness. After all, you can pretend to be neat for just two weeks, but you can't pretend to be neat for four years! 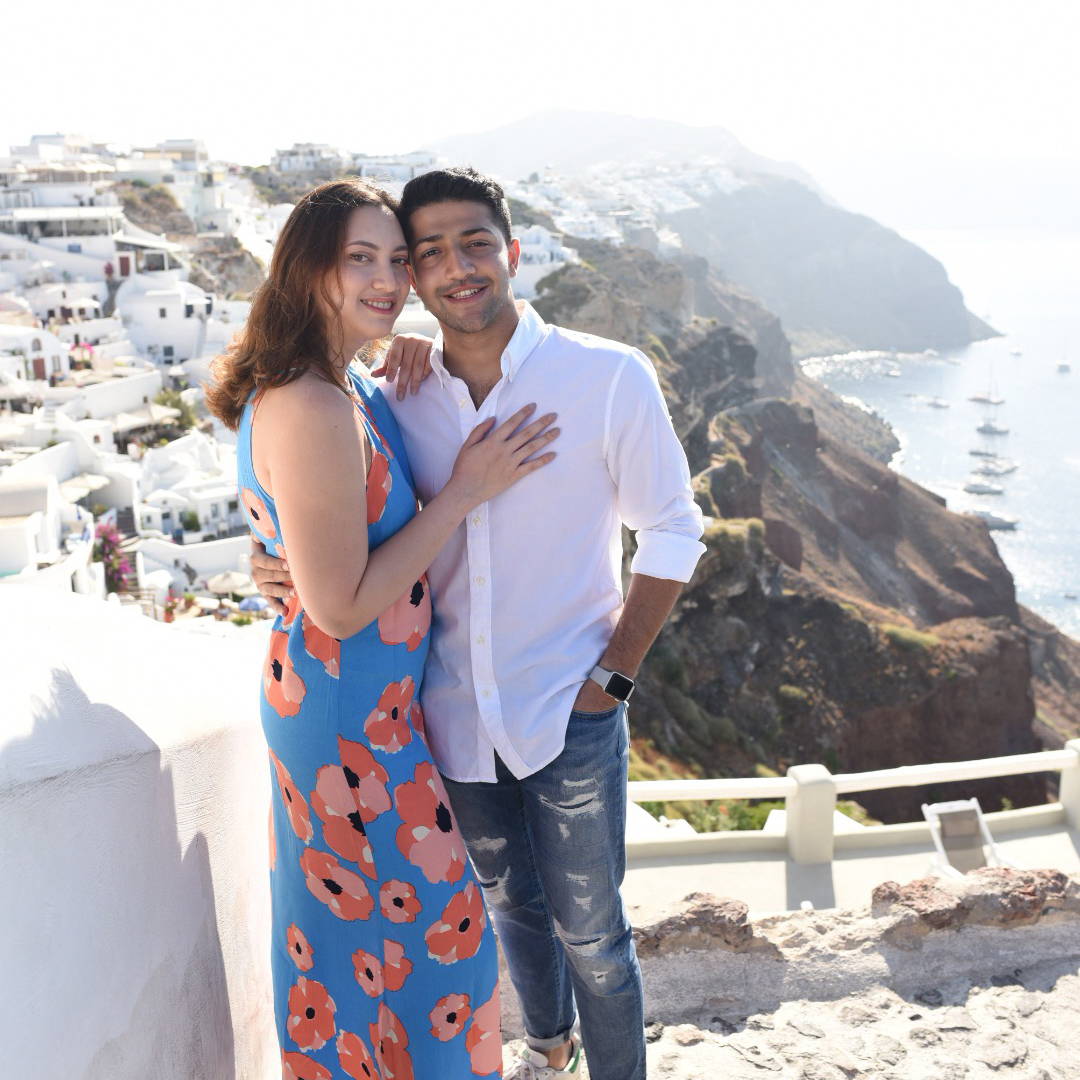 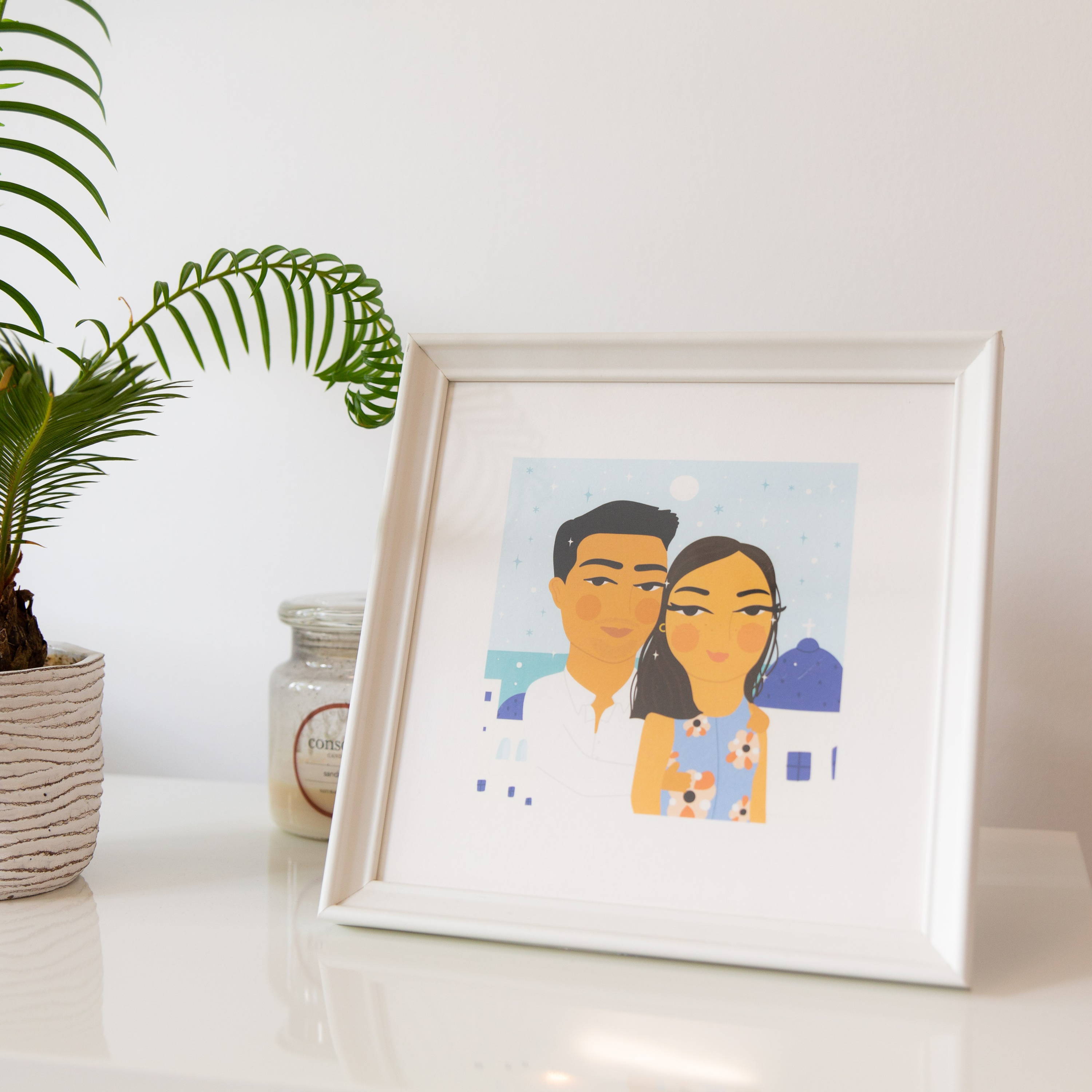 This illustration was based off a photo they took on that vacation, which remains one of their favourite trips together.

How have you worked through your differences?

Natasha: It took some time, but thoughtfully communicating our feelings helped both of us understand our frustrations.

Aadil: Dividing up the household chores is one example. I did the laundry at first, but that was a bad idea because I hated it so it wouldn’t have worked in the long run. After some trial and error, we decided to split the work based on our strengths instead. I never have to do any laundry now and Tash doesn’t have to do the dishes. But if we didn't communicate on that level, we wouldn't have figured out how to divide our chores this way.

Natasha: Communication alone isn’t enough — you also need to make a conscious effort not to do something that would upset the other by being aware of circumstances and the person’s state of mind. For example, if I'm really hungry, I would just be in the worst mood. So Aadil’s not going to be asking me at that moment about some mess that’s lying around. Similarly, if I know he's super busy at work, I'm not going to be questioning him about a chore he hasn’t done. You should know the right time to bring things up.

"Communication alone isn’t enough — you also need to make a conscious effort not to do something that would upset the other by being aware of circumstances and the person’s state of mind."

Aadil: Sometimes it’s also easier to do things separately. For us, we rarely cook at the same time because I'm not a recipe-following kind of guy, but Tash likes to follow the recipe to the tee.

Natasha: We do cook together occasionally though, like on weekends or when the pressure is not so high to deliver. But if he wants to make something very specific, he can't have me around saying, “oh, maybe you could add salt or maybe you could do this.” It’s not nice. We all have our own methods and want to do it our way at times, so we try to give each other space. 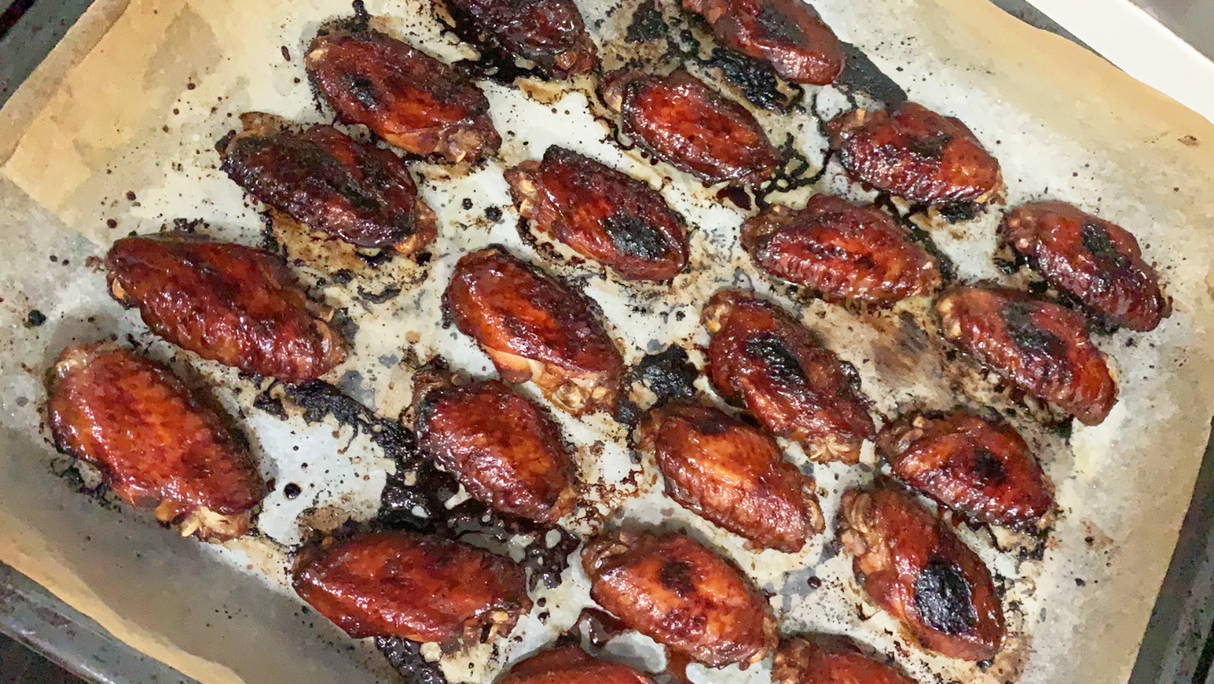 According to Natasha, Aadil enjoys experimenting with recipes. Here’s one of his many cooks! Photo courtesy of Aadil and Natasha. 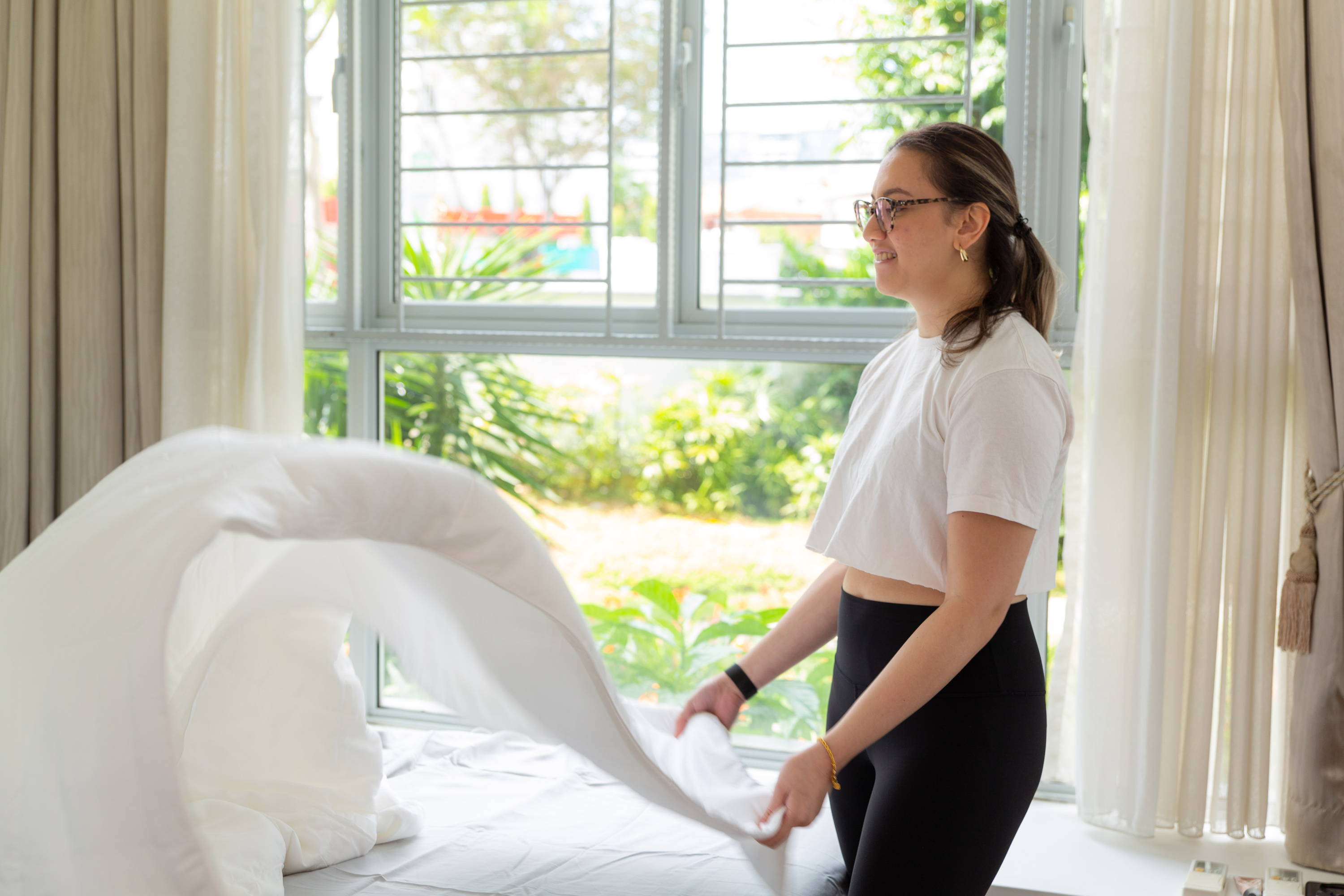 Natasha with our Sunday Duvet Insert.

Differences aside, has living together also made both of you more similar?

Aadil: I’d say our music tastes have converged since we moved in together, especially since listening to music together is one way we relax. Tash also has great music taste because she works at a music streaming service, so she’s actually made quite a few playlists for me. I learnt about one of my current favourite bands, Foals, from her. 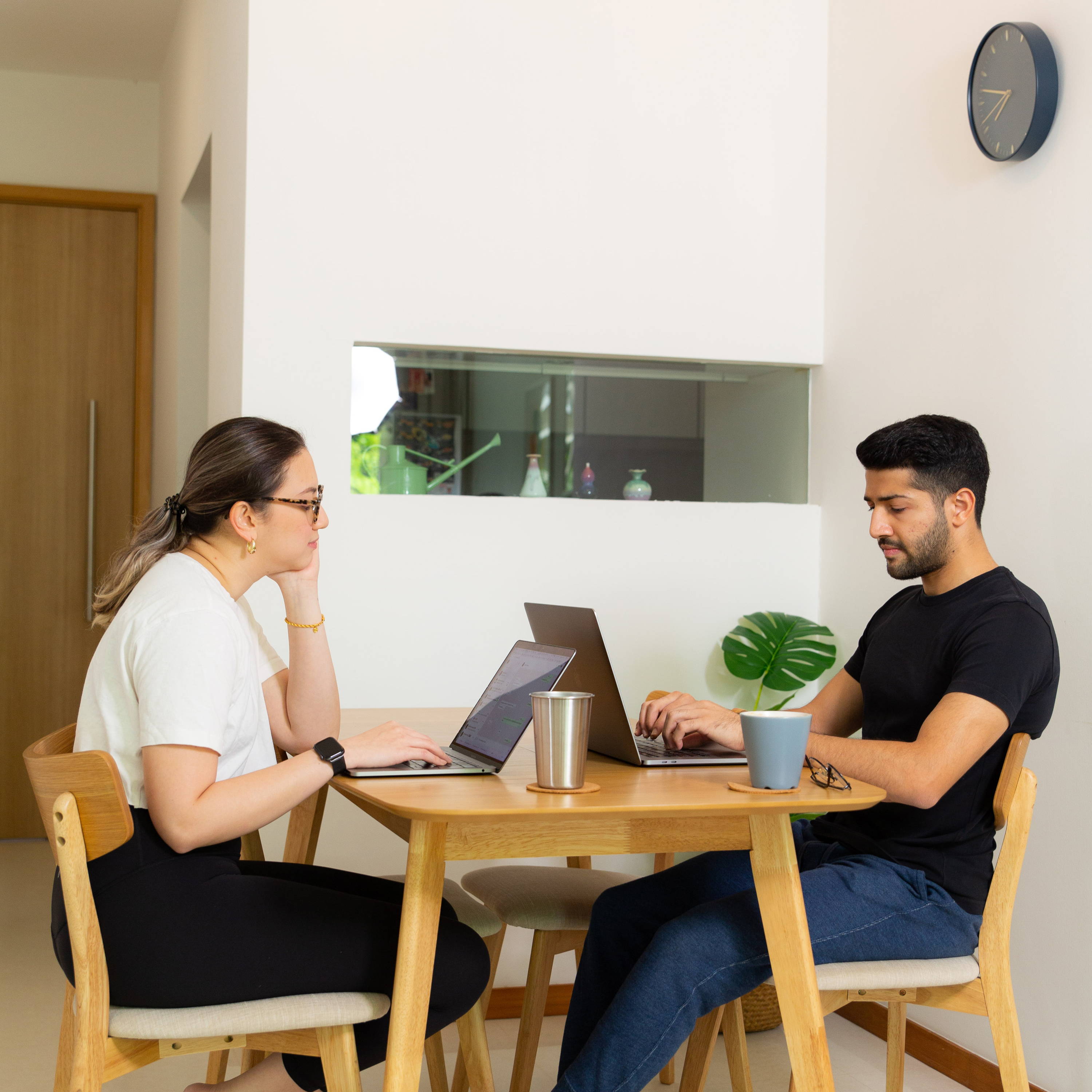 Moving into a larger house right before Circuit Breaker made the lockdown period much more bearable for Aadil and Natasha. Their previous house was so compact that the pair preferred spending less time at home. 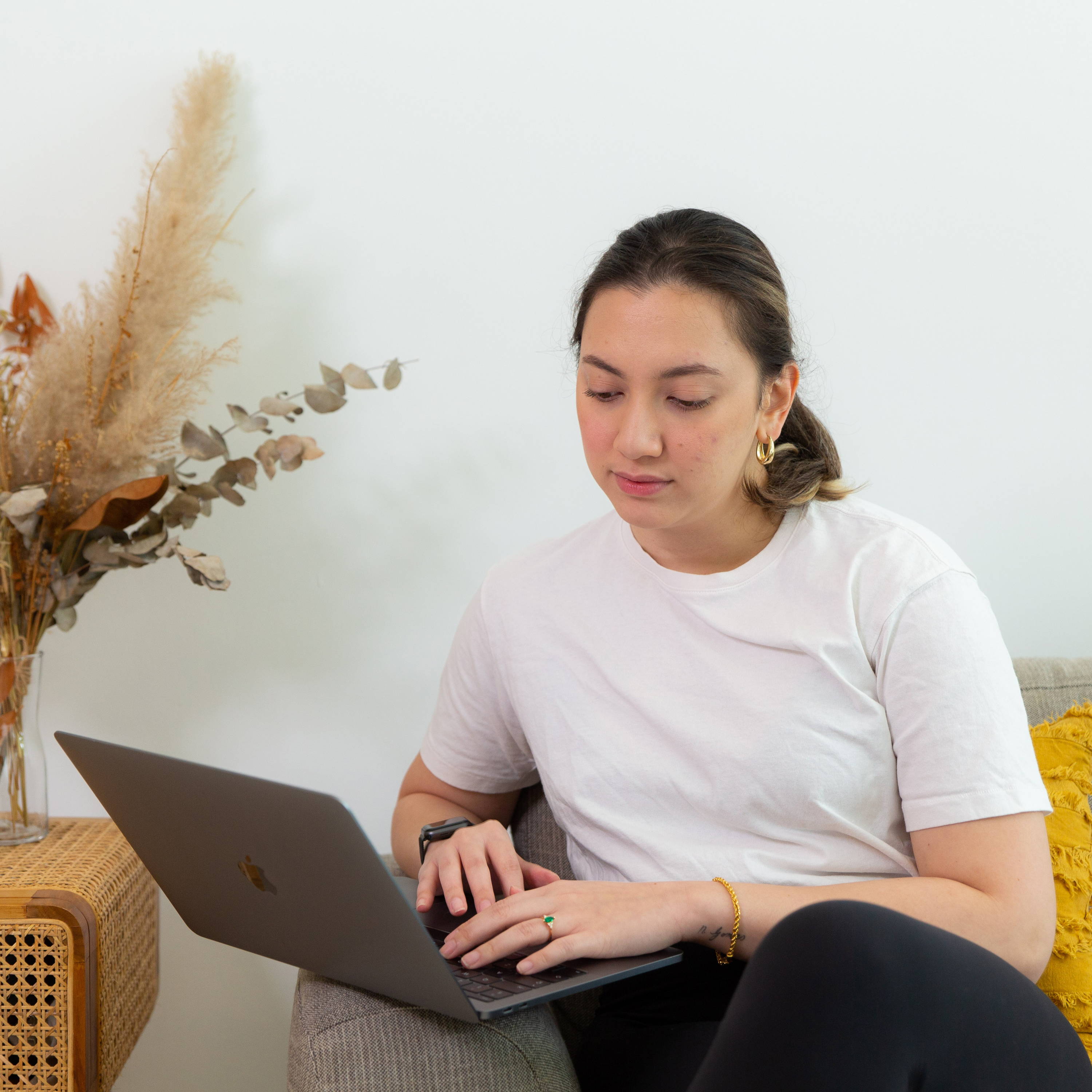 Having more personal space has also been plus. That being said, the couple have also established some shared rituals, including weekly boxing sessions and spa nights.

Finally, what advice do you have for people who are just learning to live with someone new?

Natasha: If you're not married yet, take the opportunity and time to learn as much as you can about this other person that you might potentially spend the rest of your life with. Really ask yourself questions like what habits this person has that you like and dislike, and if you can put up with those you dislike. Will you be okay with it if that person is not going to change?

I think of living together as trial and error. Sometimes people live together, realise they don’t actually get along, and decide they shouldn’t be together after all. I also know couples that have gotten married and moved in together before finding out about living habits they couldn't gel with. So for me, living together first is really important because — I know it's not very romantic — you have to try the car before you buy the car. 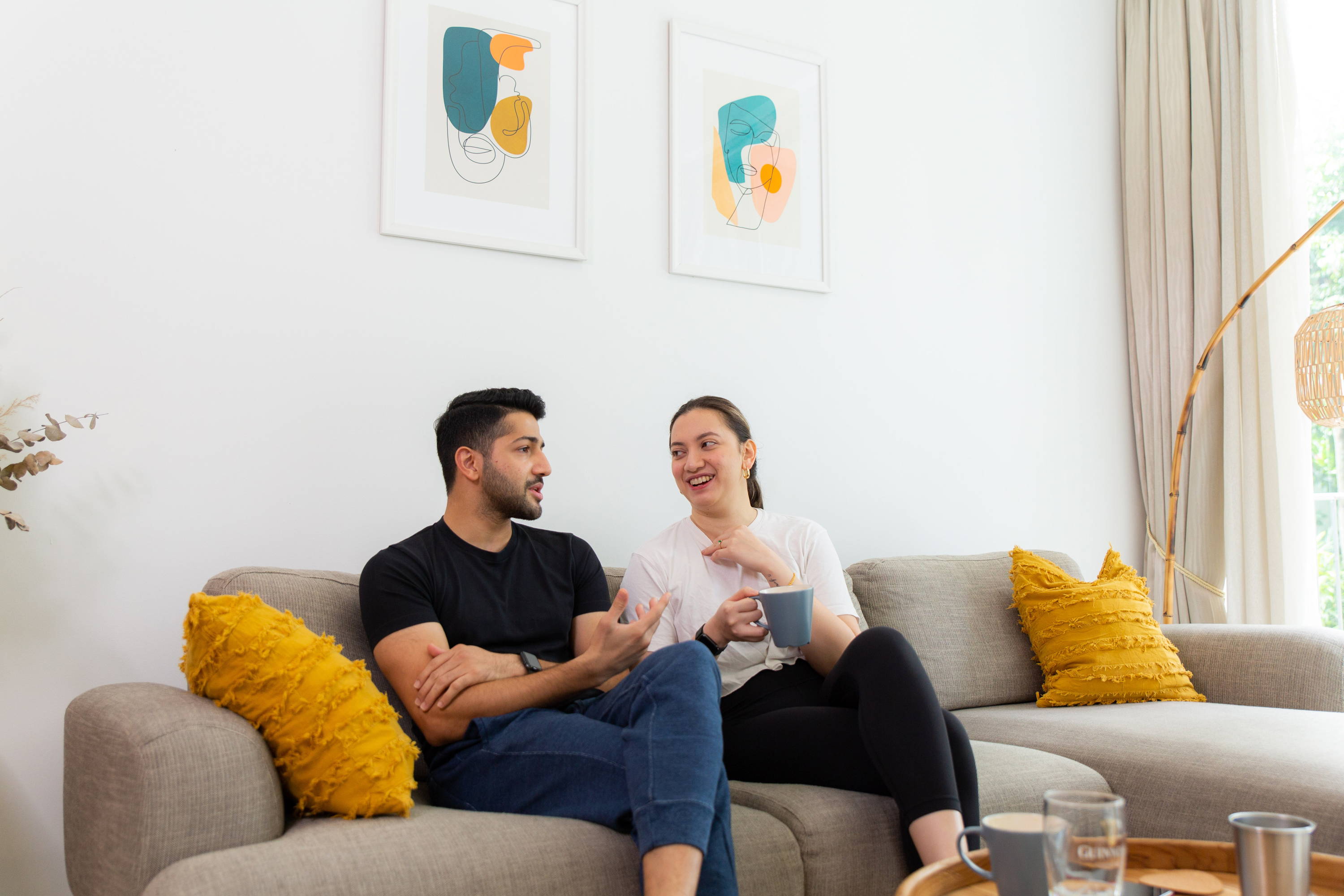 Aadil and Natasha in their breezy living room. A larger house also meant they had more opportunities to play around with furniture and décor.

Aadil: It’s also important to make a conscious effort to spend time together and apart. Living with my partner is one of the best decisions I’ve ever made, but it’s easy to take the fact that you are always at home together for granted. You still need to actively put in effort to spend quality time with each other.

Having said that, don’t forget to balance it with time for yourself as well. You don’t have to do everything as one, and I think having personal space is important. During Circuit Breaker, for instance, we were stuck at home looking at each other the whole time. So it was good to just step out for a walk and take some time for myself. 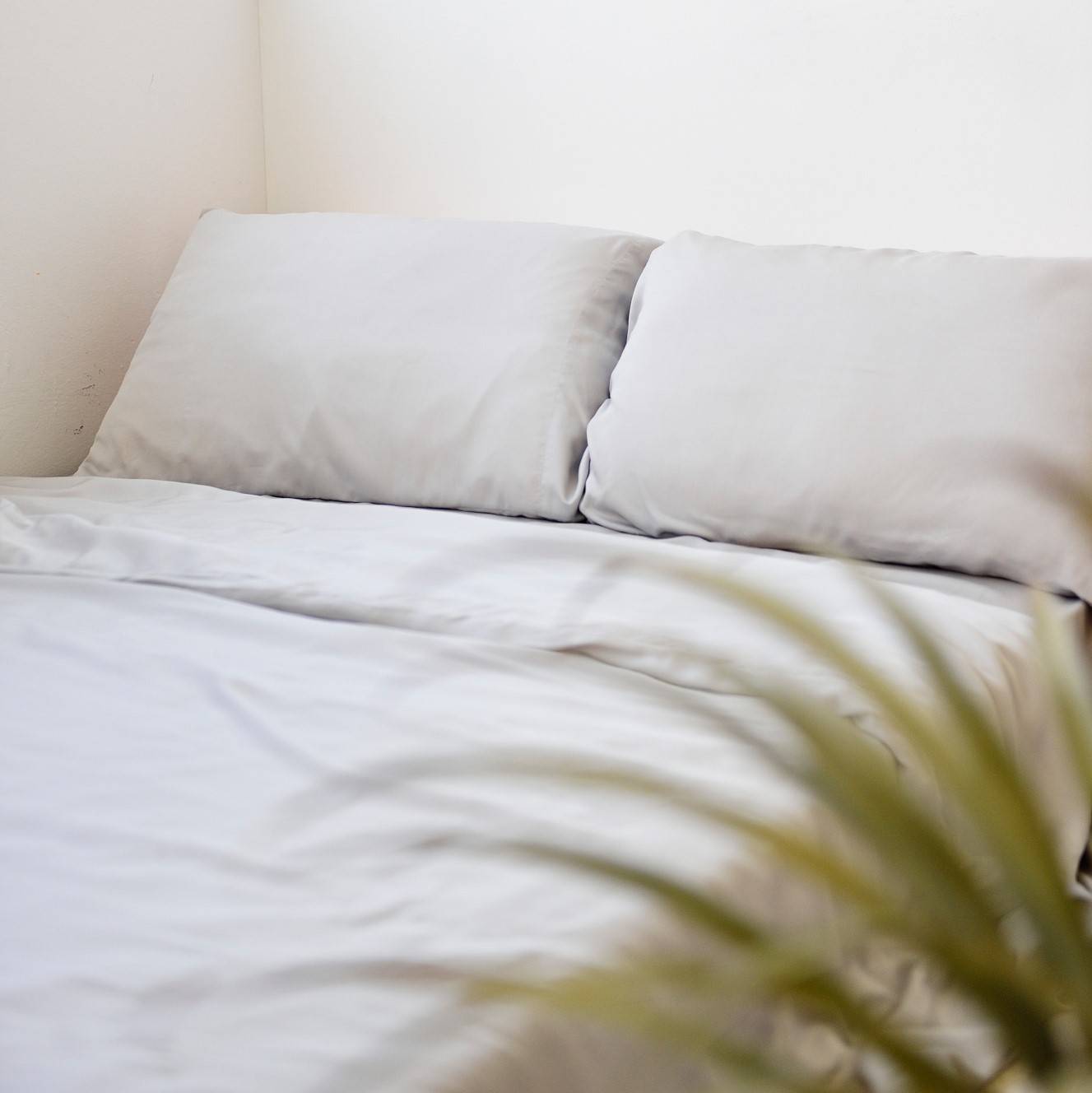 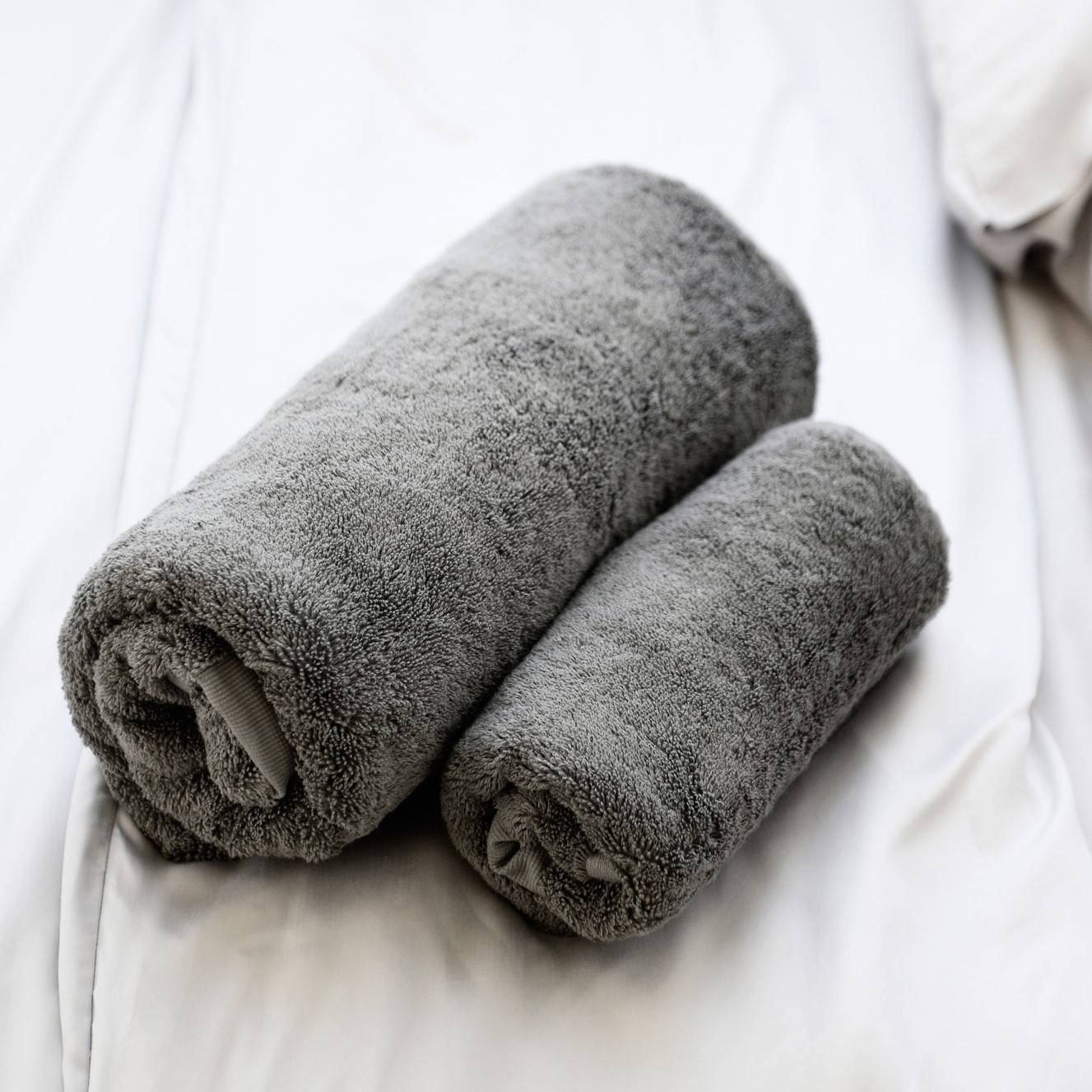 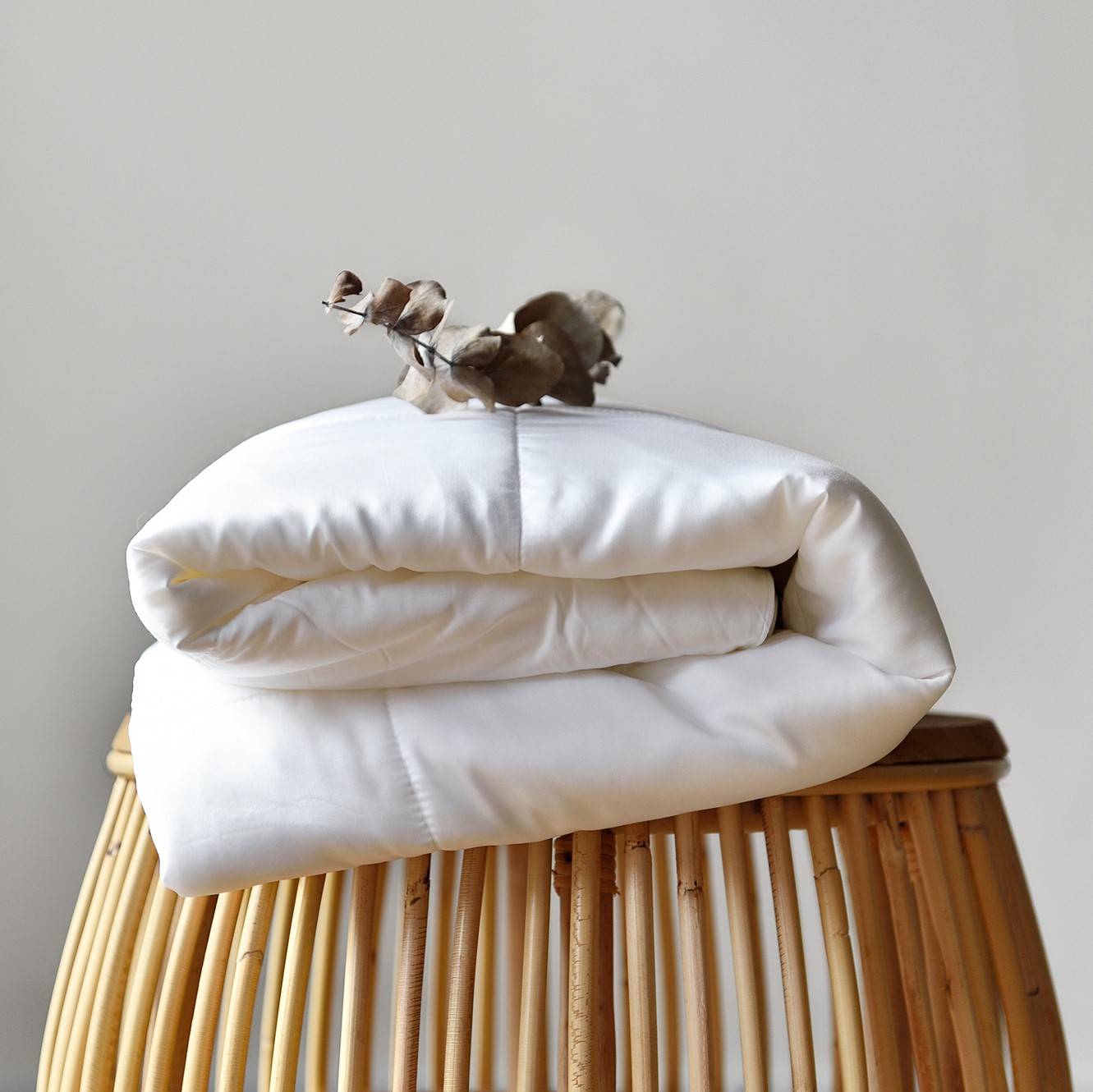 Slowing down with Emma Richarxson

The Ups and Downs of Motherhood with Winnie Chia