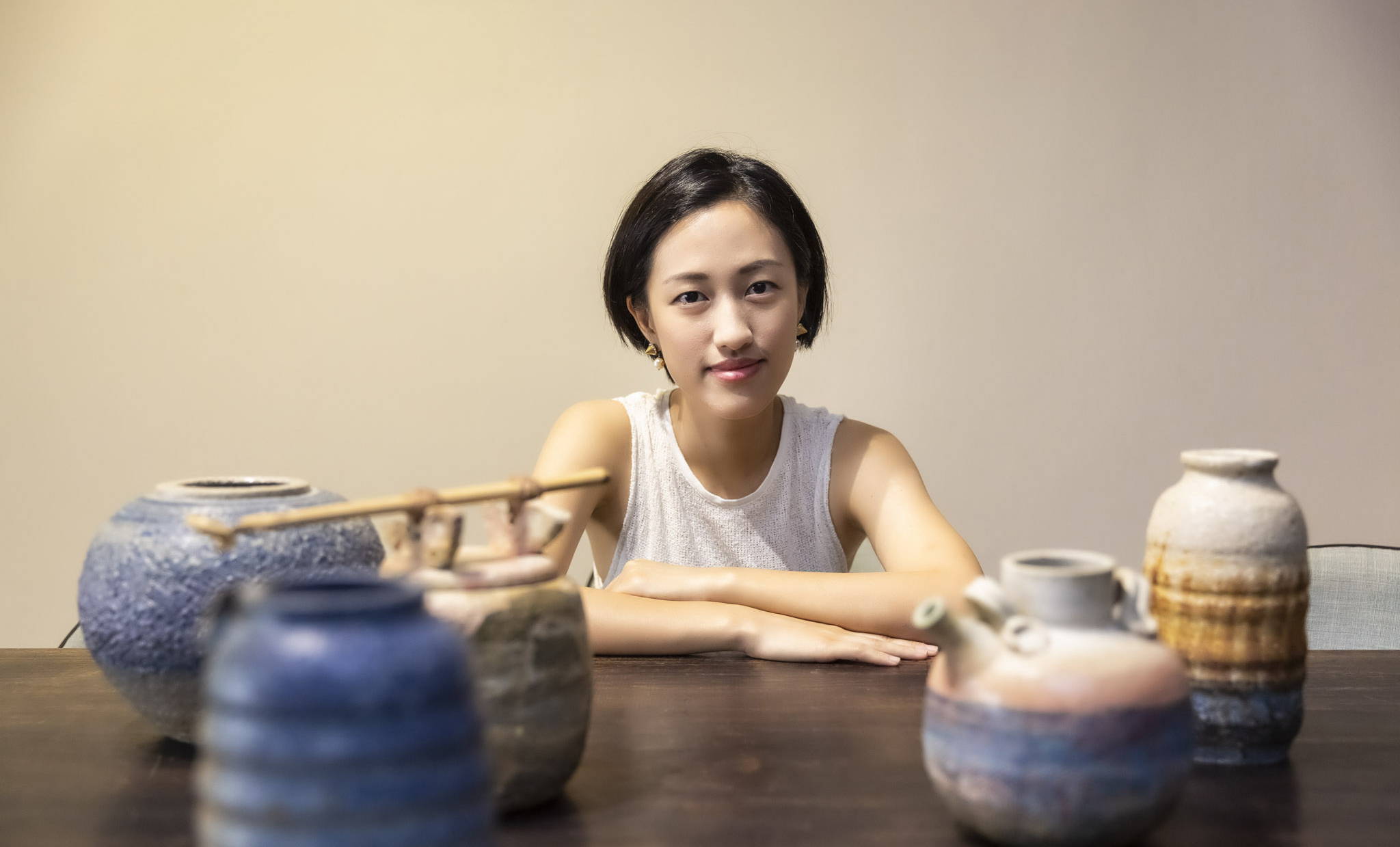 Moving from the corporate world to the art of pottery, ceramic artist Jeanette Adrienne Wee is breaking the mould of what some may deem an unconventional career path. She is the founder of Adrienne Ceramics and co-owner — her husband is her business partner — of ves.studio, an art studio dedicated to ceramic art and functional wares.

We visited her at her home studio where we learned more about her journey with clay, life in Japan, and self-discovery.

How did you discover clay as a medium and when did you realise that this was something you really loved?

When I first started, I was in Osaka, Japan. I was 19 at the time and on an exchange programme. There was a ceramics studio near my dormitory — I kept seeing their signs whenever I walked past it. I thought, yeah, why not learn the craft where it’s good? That’s when I decided to take a class, then two, which then led to a year of classes... and then now.

In the beginning, all I wanted to do was learn how to make something with clay. But I realised that it required a lot of discipline because clay doesn’t listen to you; you have to make it listen, and you need skill to make it do that. That’s when it came to me that there are so many things that I didn’t know about ceramics and what goes beyond making a single piece. 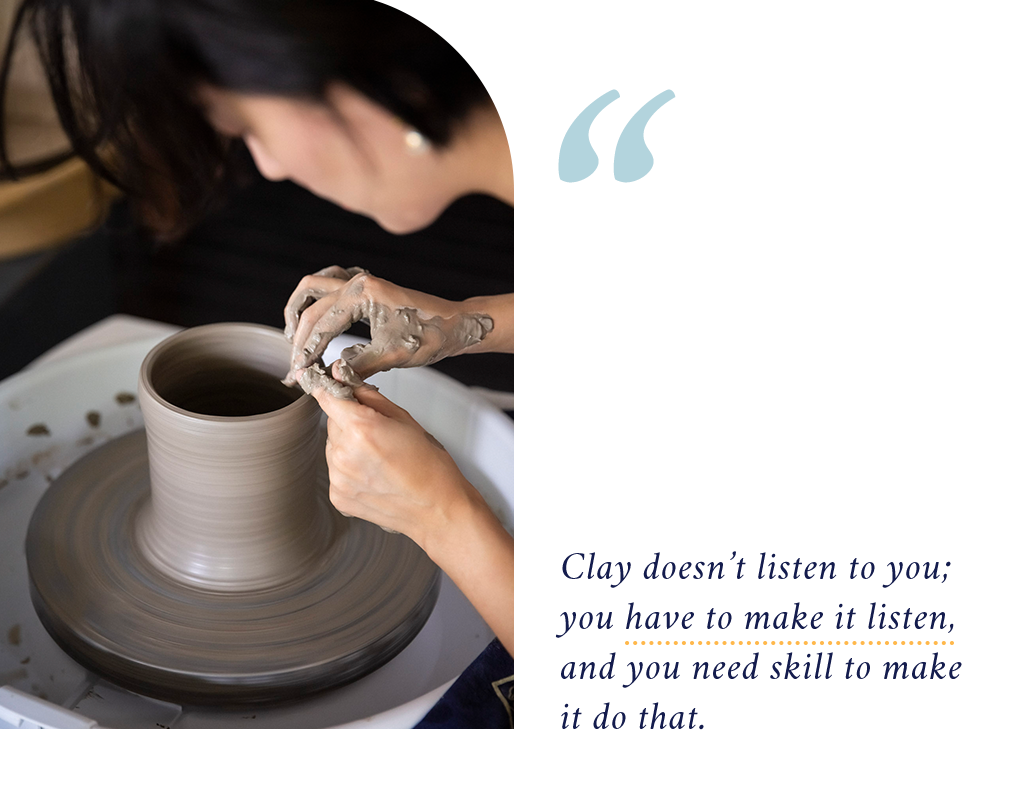 Japanese teachers are very, very strict. That’s how they train endurance. The teachers kept telling me to make a particular shape — just a normal cylinder, which you only realise on hindsight is the foundation of everything. You have to learn how to make a cylindrical shape first before you can open it up into a bowl.

As an eager 19-year-old then, all I wanted was to learn how to make something with clay. For the first six months, all I made were cups! It was only in the next half of the year when my teacher finally allowed me to try making bowl shapes.

At that time I was a little disheartened and thought I wasn’t doing a good job. But eventually, I understood that that’s how people learn in Japan. In order to be skilled at something, you can’t rush into it. You need to understand and learn the discipline before going places.

You quit your full-time job to start Adrienne Ceramics and ves.studios. What made you take that leap of faith?

Before I pursued this full time, I was a government officer for a statutory board. While I didn’t hate my job, I also knew I was interested in pottery. My husband — at that time we weren’t married yet — is a singer-songwriter, and has been that for a decade. Just seeing how he made it work for himself was encouraging enough for me.

My main concern was if we were both artists, who would put rice on the table? I was always content with doing pottery as a hobby, but he was the one who encouraged me to pursue it full-time. He told me, “Our life is already short and if you know you want to do something, just do it and see where it takes you. If it doesn’t work out, you can always look for a job.”

My ex-boss was also really encouraging. He said to me, “If you’ve always known you’re more interested in something else, you should pursue it.” He also had the same advice [as my husband]: “You have your CV working for a government office for two years. If it doesn’t work out, you can find a job.” I was 27 then, so I thought, yeah, I guess there’s no loss for me.

It was also the timing of everything. I got a residency offer in Japan, so I quit my job and went for it. It was quite reckless [laughs]. I didn’t think of a studio space or how I was going to make money from this. I just really wanted to learn. 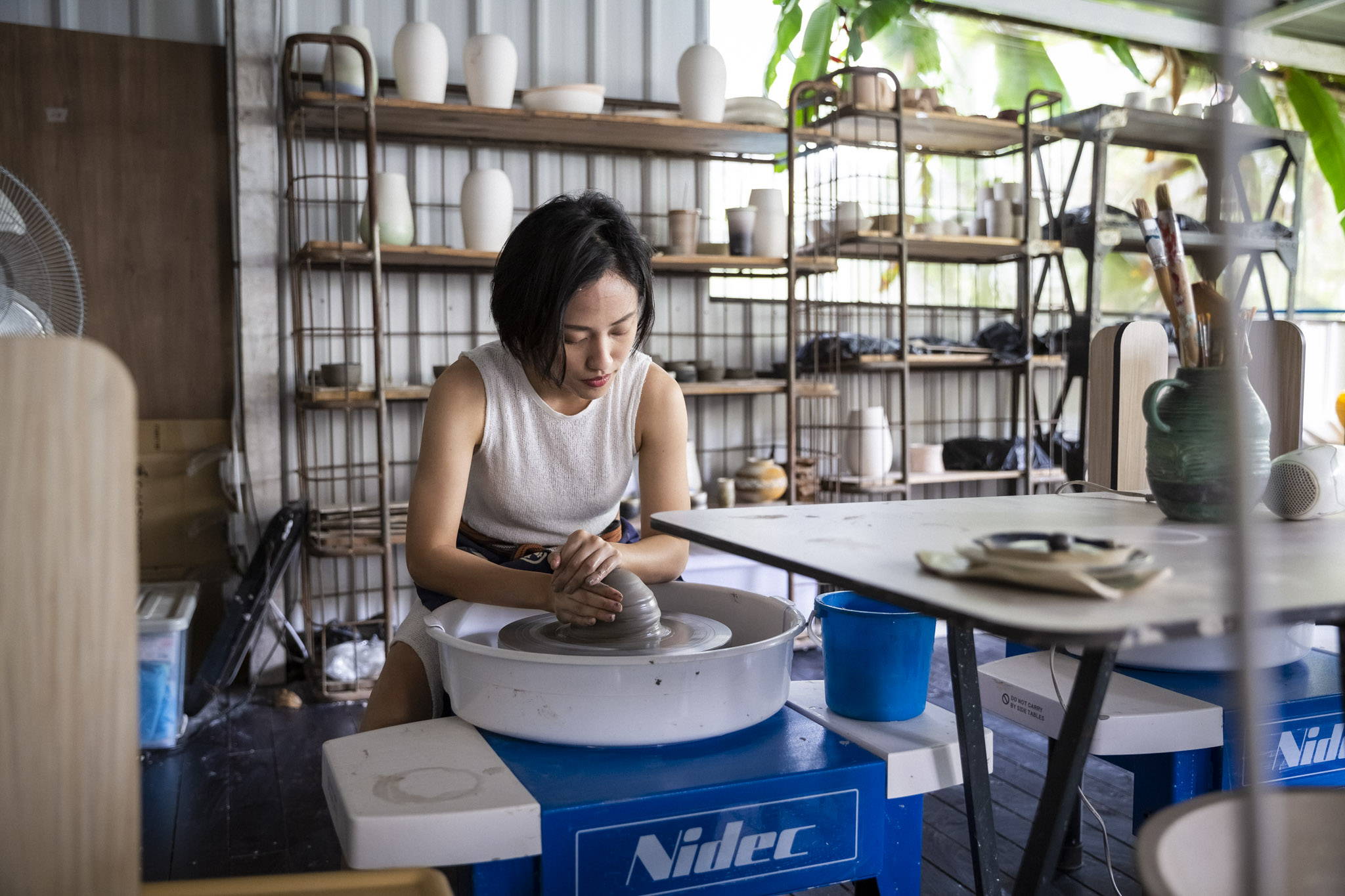 Jeanette showing us the basics of wheel throwing at ves.studio.

What advice do you have for someone who wants to make the transition from a full-time job to becoming a full-time artist?

I would advise anybody who wants to do something that’s a little unconventional, like ceramic art, to have savings first. I didn’t panic that much in my transition because I had some savings.

The harsh reality is that if you’re struggling with finances, you’re not going to love whatever you quit your job to do it. You have to have a pool of reserves to tide you over. Also, if possible, to set a target for yourself: have a goal and plan how you intend to get there. It’s good to plan so you can manage your expectations or get ahead of yourself. 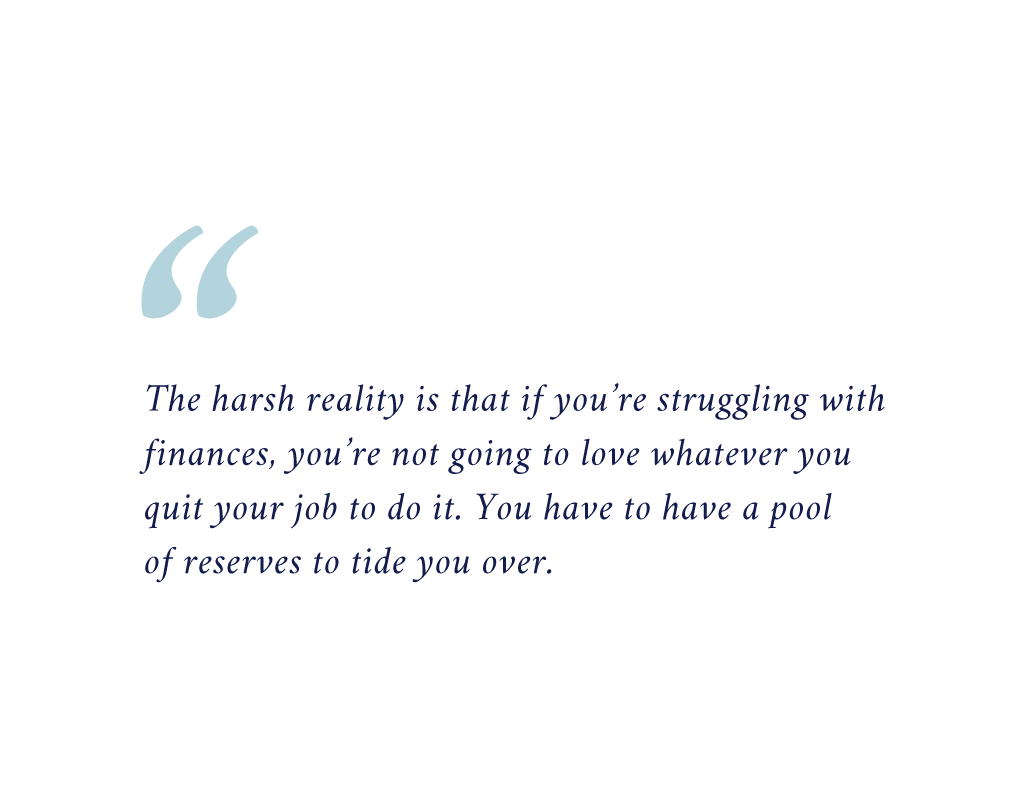 I mean, I think you have to be prepared, especially in Singapore, where pursuing a craft is not a common trajectory. It’s not like in Japan or Europe where craft is a vocation and craftsmen are respected for their skill. The Singapore market is also really small so you have to think about how you’re going to survive. You need to be prepared to not make money for a while.

Was that the reason why you started teaching classes?

Yeah. I’m not going to lie: teaching is one of my primary incomes. At the start, it was for the money but as I started teaching, I realised that I have to teach. If I hone this skill, believe in this craft, and want people to appreciate it, there’s no better way to help people understand that by teaching. 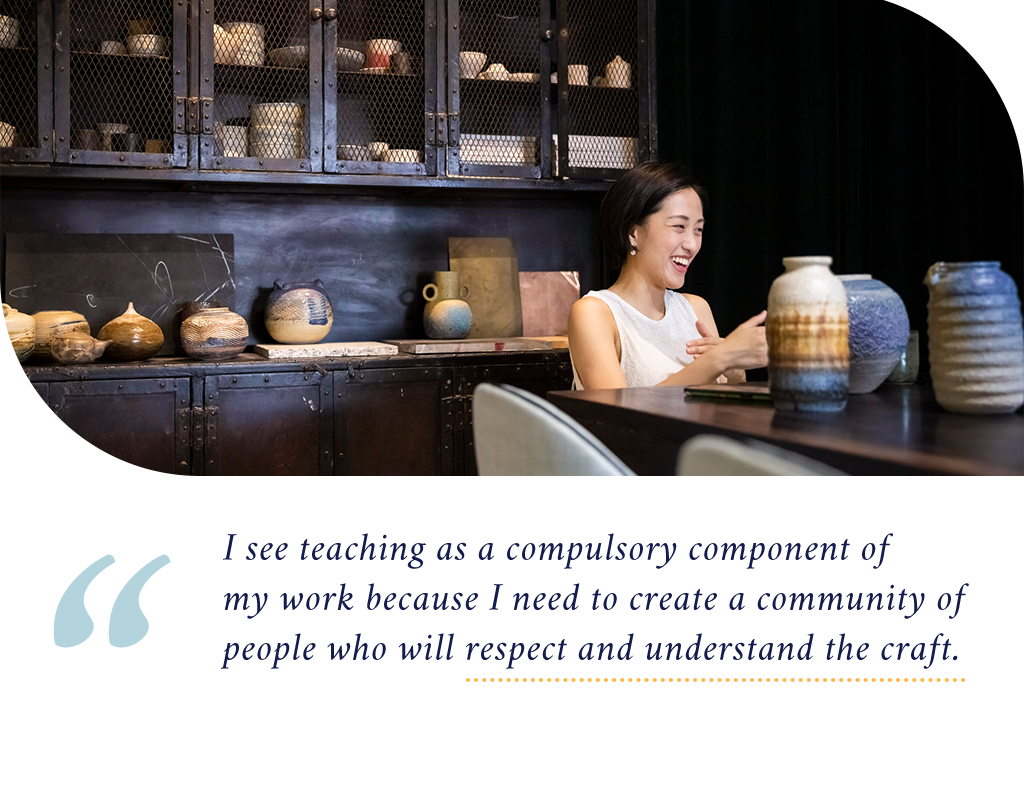 I see teaching as a compulsory component of my work because I need to create a community of people who will respect and understand the craft. It’s a way for people to see ceramics as something more than just a hobby. You need to put in the time to be mindful about what clay is about to realise that. A lot of people see ceramics as a mass-produced thing, but it really is not.

You’ve mentioned a lot of misconceptions people have with clay, ceramics, and the craft itself. A lot of people also say working with clay is very therapeutic — would you agree?

The thing is you need to pass that learning curve before you get to that level of being comfortable with clay — that’s when the therapeutic part comes into play. I try to encourage students who feel really panicky with the wheel by telling them that they’re just getting to know this medium and it will take time. If you pay attention to how the clay reacts to you, you can change it as you go. It took me a while to realise this myself as I’m still learning.

Pottery is not just art; it’s both art and science. As much as it is hands-on, ceramics is actually very science-based, especially with the glazes and the firing. I had to create my own glaze formula and understand the effect of heat on the glaze. Sometimes it takes me weeks to get the right formula

Your pieces are often inspired by nature. Can you share some memories about the inspiration behind your work?

One of the most recent inspirations would be my trip to Scotland, where I collaborated with a whiskey brand. I had never been to Scotland, and while I was intrigued by the structure of the buildings and my surroundings, I kept seeing these black spots and gradient marks on the walls of the distilleries. It happened to be a type of fungus that’s attracted to alcohol. Its texture really caught my attention, and I decided to make pieces inspired by that. I like to observe the little things around me and am usually drawn to things that are out of the norm. 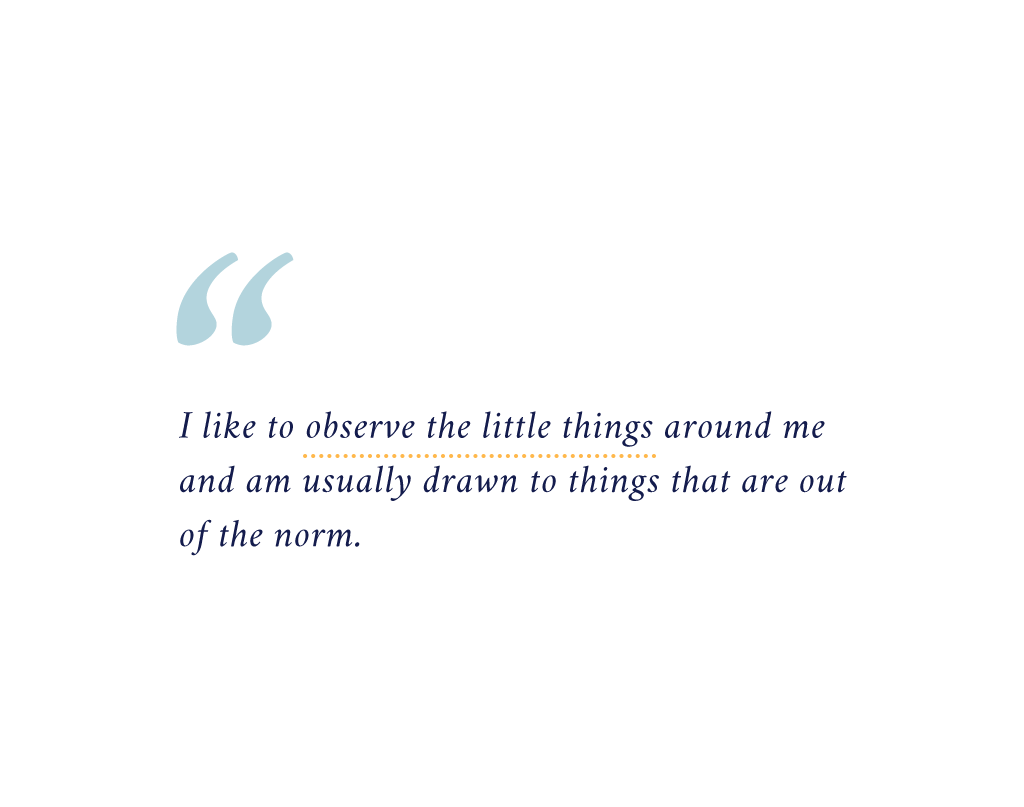 Hayao Miyazaki is also one of my biggest inspirations. I really love the way he creates nature in his work, since a lot of my work is influenced by nature too. I’m very big on how nature looks in landscapes, and he just does it so wonderfully.

How would you describe your approach to clay and ceramics?

I’m quite systematic. A lot of people are more experimental and abstract, but my approach is to keep experimenting with something until it becomes effortless. Instead of creating many different forms, I ask myself how I can develop just one shape and make it into a multitude of different things. When I was doing An Ode to the Sea and Sky — I wanted to have the texture of the sea splashing on the shore translated in my ceramics — it took months of experimentation and trial and error to create that organic feel. A lot of times people think that pottery is all fun, but it’s also a lot of hard work! 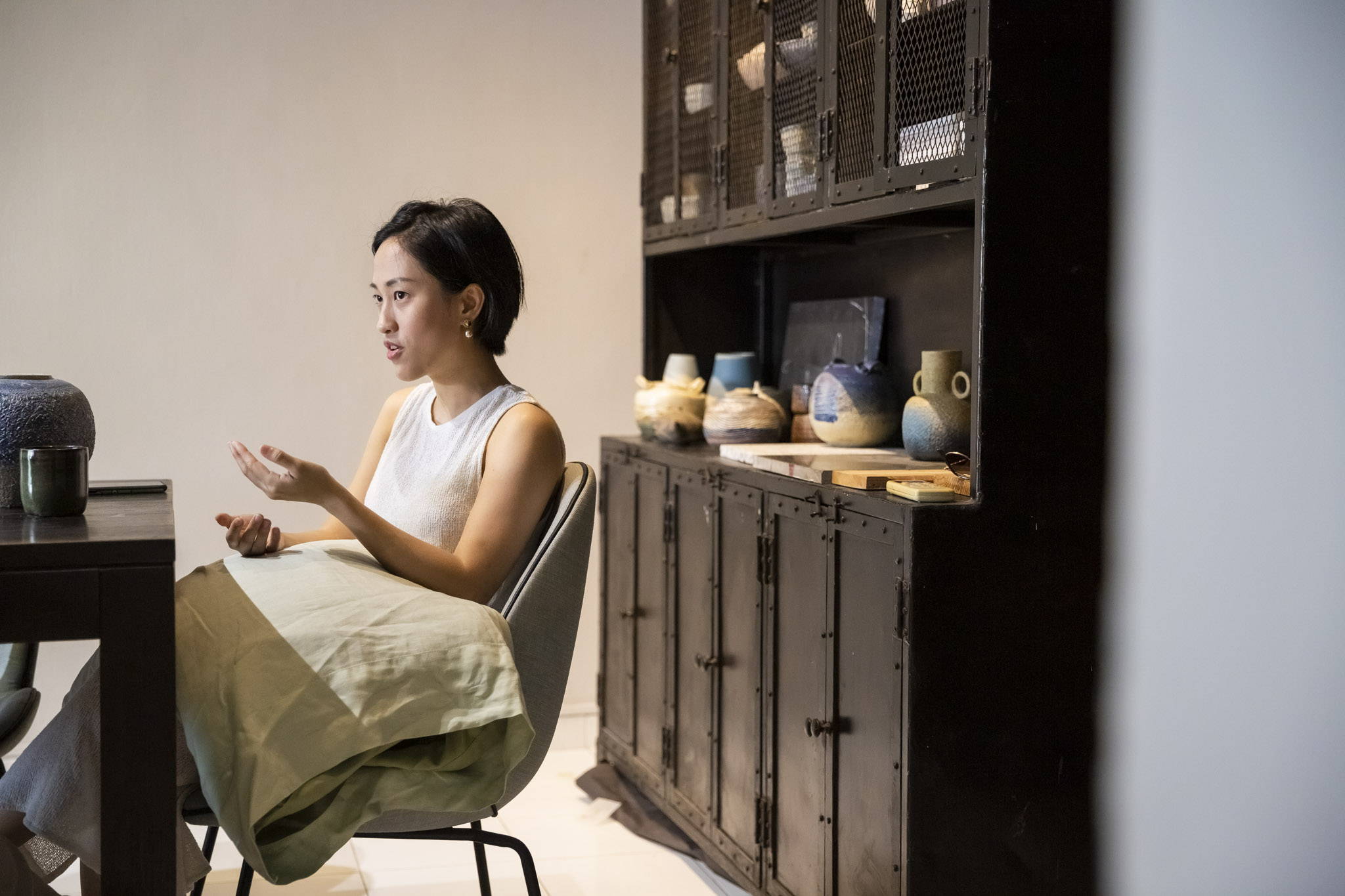 Jeanette splits her time between her personal studio, where she makes most of her pieces, and ves.studio, where she hosts open studio hours and conducts classes for anyone interested in the art of ceramics.

What’s something that you learned through clay that you apply in your daily life?

Clay has honestly taught me so many things in life, but one of the most important lessons I’ve learned is that what you think is ugly can always be transformed into something beautiful — if you try. It’s taught me that it’s not the end of the world if you make a mistake. You can always try again. 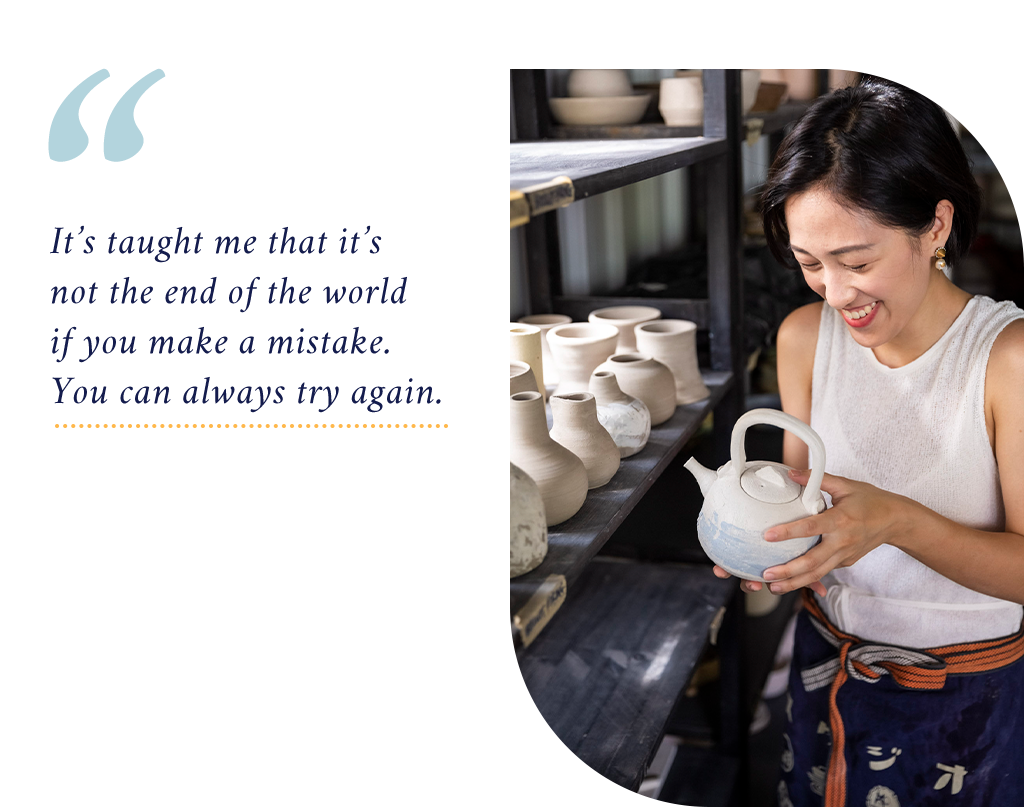 Since clay can be trashed and recycled, a lot of people would just trash a piece they are working on if they don’t like it. I always tell my students not to give up on a piece they’ve spent the last thirty minutes doing. Instead, I encourage them to try and fix it — do some adjustments and work with what they’ve done. You know, a lot of students have told me afterwards, “I really thought this was a piece that’s a gone case but now that I look at it again, it’s actually quite charming”. I think that process helps people to cope with failure.

Pillow Talk is an interview series done in collaboration with Public Culture, an editorial experience studio that believes in connection over communication. This feature was photographed by Christopher Wong for Sunday Bedding and Public Culture.

While you're here, check out our sheets: 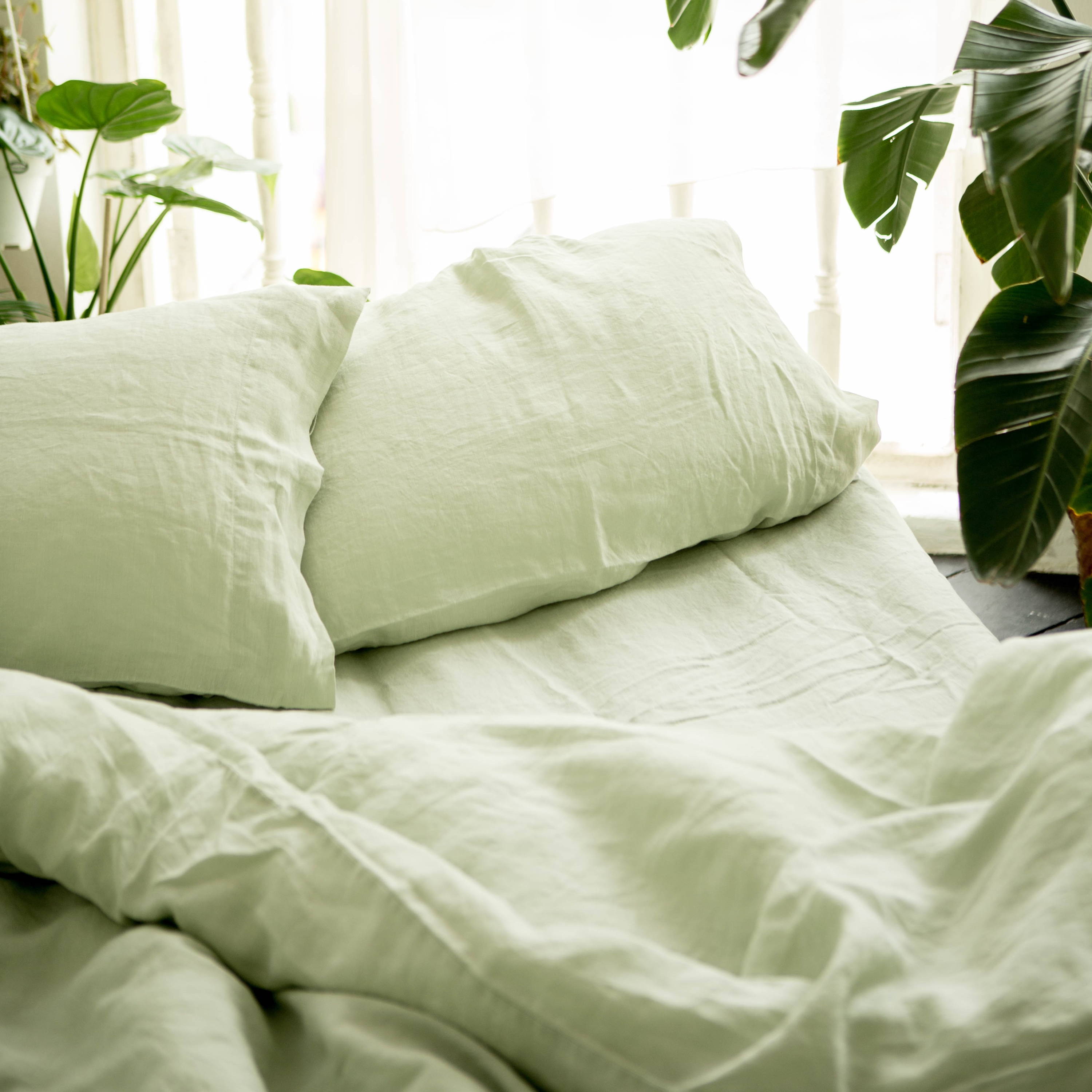 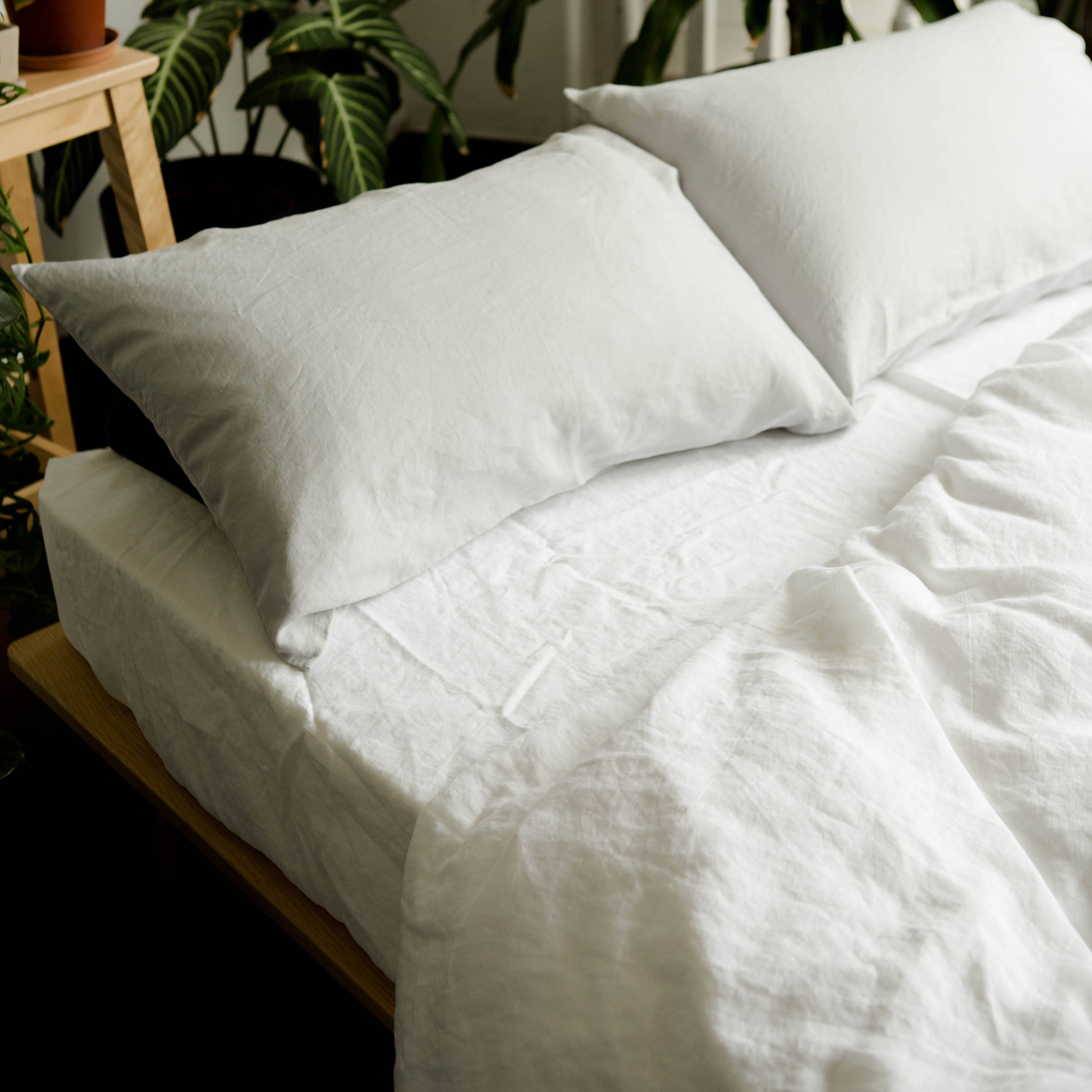 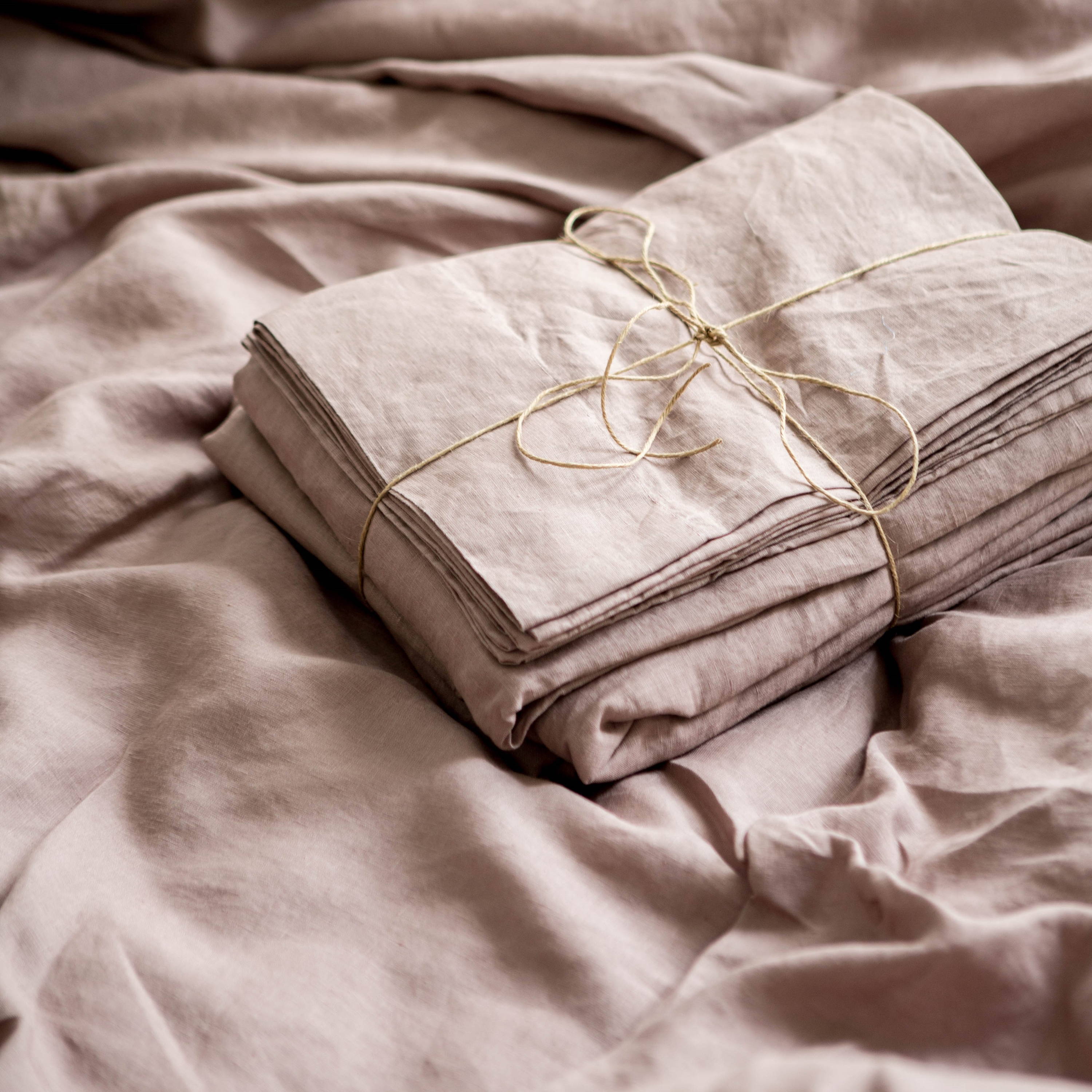