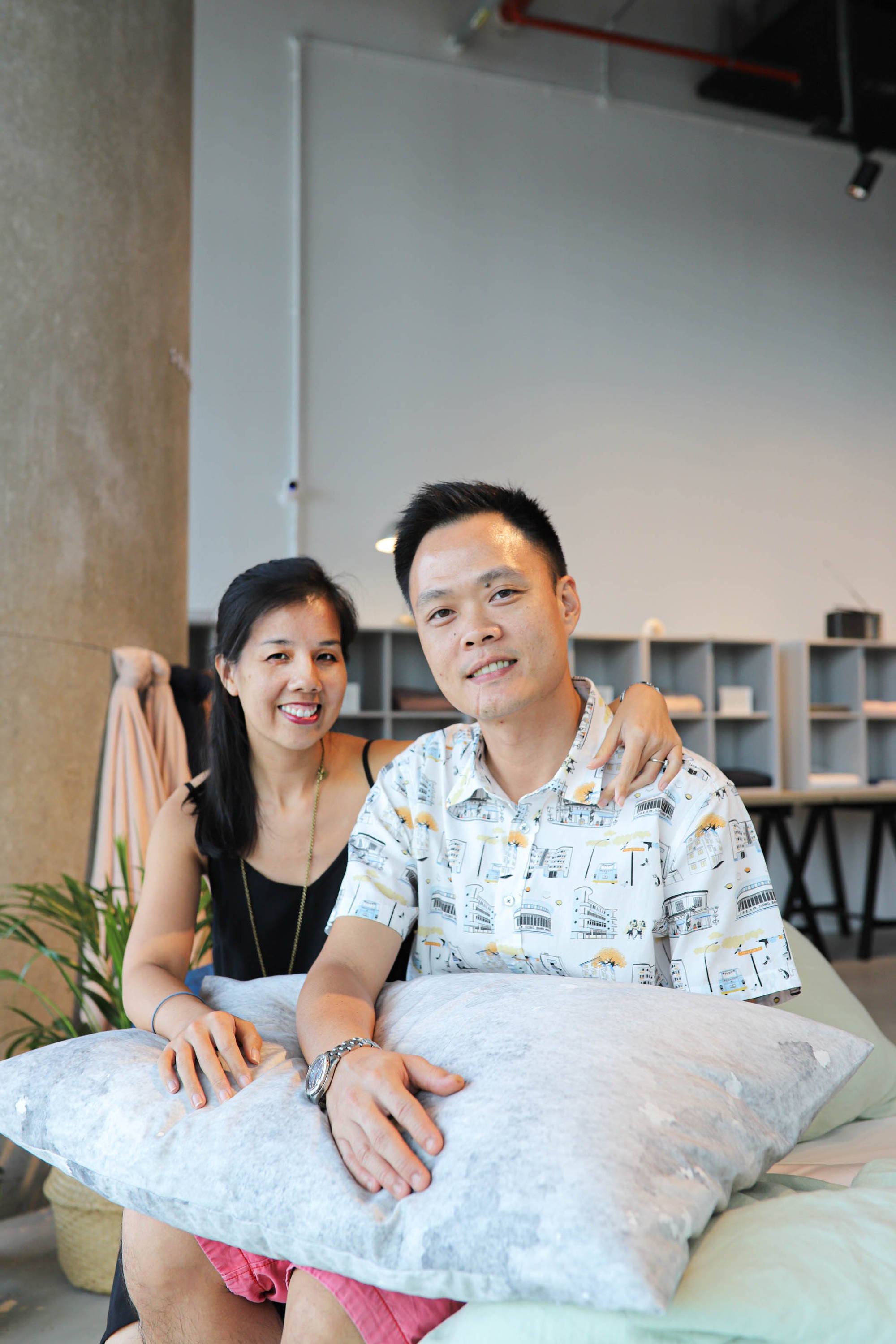 Cheryl and Daniel at our #SundaySleepClub pop-up at Marina One.

Cheryl and Daniel had two choices — to move to India and live out a comfortable life, or to stay in Singapore and begin their own social enterprise. Two years on, and they’ve established The Social Space, a multi-concept store all about bettering the community and the planet. From a fair-trade retail area, to inclusive hiring practices, The Social Space presents an idea of what socially conscious living could look like in Singapore. While manning our #SundaySleepClub pop-up over at their café at Marina One, we caught up with the husband and wife duo to learn more about how they started it all.

We love how you support the socially responsible business community both locally and regionally! Can you share with us your personal story of how you've built The Social Space?

Cheryl: I was actually planning The Social Space with another partner. We were both working on it for about a year, but she pulled out at the very last minute. At that point, both Daniel and I were living in Bali. We were there for two years. It just so happened that when my then business partner pulled out, Daniel was also having second thoughts about being in a bigger corporation.

Daniel: Yeah. I was working as State Manager for Singapore Airlines in Bali. It was a good life. When I was first posted there, it was during Singapore Airlines’s 30th anniversary flying to Bali. As part of the celebration, we went to volunteer at a few old folks' homes in Singaraja, a port town in the northern part of Bali. After that experience, I asked myself, “Why is this done only during special anniversaries?” I began looking for suitable charity partners to work with so we could contribute more consistently rather than only on special occasions. It didn’t end very well.

My boss essentially told me, “Why you bother with this (initiative)? It’s doesn’t even count as your KPI!” And he wasn’t wrong. It’s a fact of the corporate world. I told him, “When I manage a station, I run it as though it’s my own company. More than just providing excellent customer service and transporting passengers from destination to destination, I want the company to give back.”

One of my proudest achievements was when I managed to get KrisShop to sell works done by Ketemu Project, a creative space that works a lot with people with schizophrenia. We commissioned Kabul, founding artist and co-founder of the Ketemu Project, along with Loster, a Balinese artist, to produce 50 paintings that were sold at KrisShop. Rather than money, I had hoped that the collaboration would give them branding. To be able to say, “Yes, we’ve done a limited collection for Singapore Airlines” — that holds a lot of weight.

Even though I was really happy about that project, I also came to a point where I was contemplating a lot about life: how long more could I do this? It was a comfortable life... but, was that all?

When Cheryl’s business partner pulled out, I was actually given another posting. And I think we both actually said, let’s just go to India and start over.

Cheryl: And it would have been a very comfortable life.

Daniel: Yeah! But, ultimately, I really do believe in Cheryl’s vision of wanting to build a business that not only gives back to the community and helps people, but is also profitable and scalable. So, I decided to leave. And here we are. 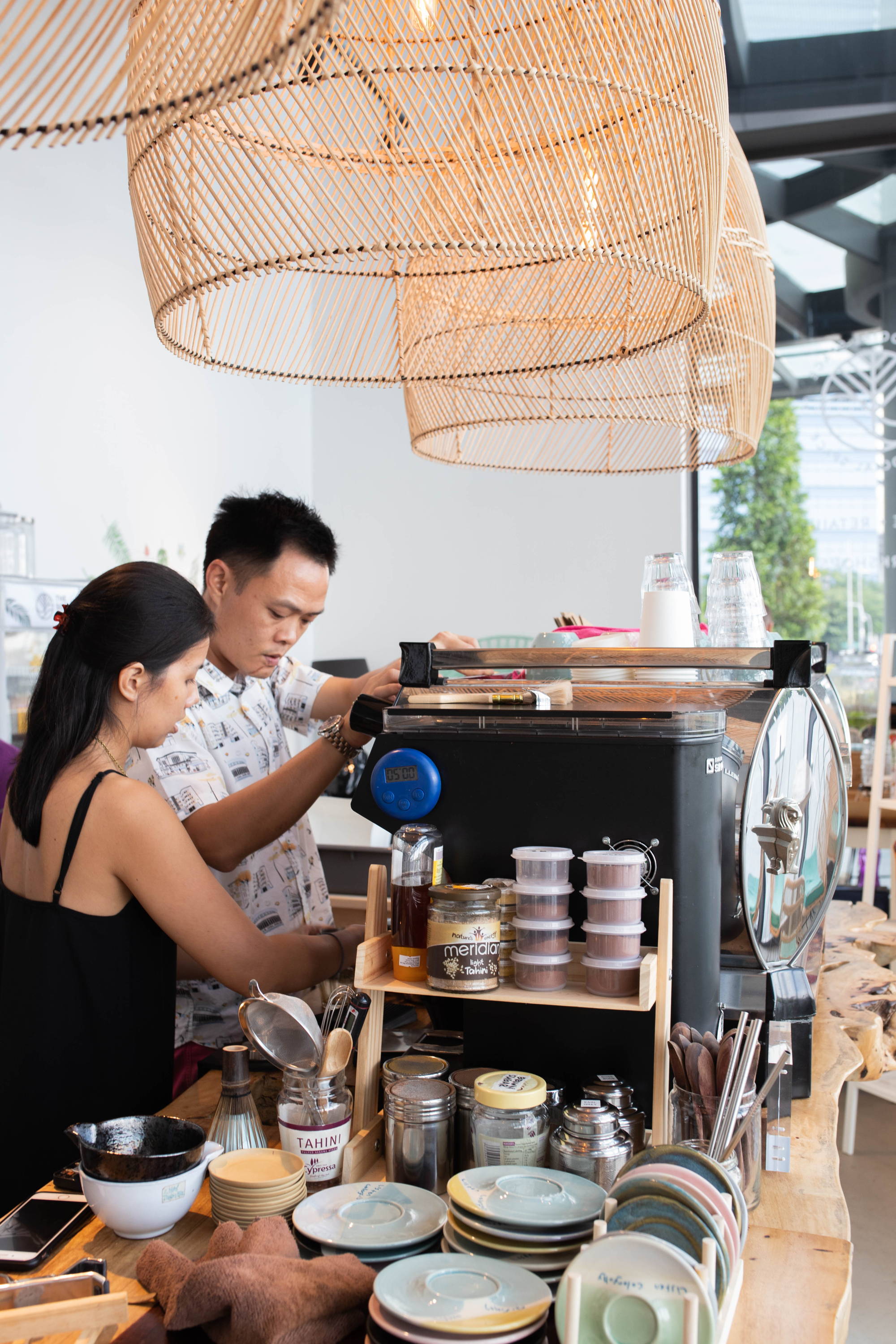 Cheryl and Daniel making coffee at their Marina One location

How do you feel, now that your vision is realised?

Daniel: We haven’t really had the time to sit back and take it all in. We’ve only done this for about 1.5 years! We’re really young and we already have a second location. It’s great and all, but, we’ve also given up a lot to build that. We don’t have a social life (laughs). At the end of the day, it really is about the team. Our staff keeps us going.

Cheryl: Even going into [the business] was a big rush. From the time that my business partner pulled out to when Daniel got on board and we had to open… I think it was all done in three months? It was always go, go, go. We never even sat down together to talk about our expectations or long-term goals. At the end of the day, that’s how we work. We didn’t plan, oh, after 1 year or 2 years, we have to open x amount of locations. For us, at this point, as long as we can keep on moving forward, it's already a big plus.

Daniel: It’s the same with our business. We say we practise sustainability, but that’s about it. We don’t shout many of the things that we do because we want people to enjoy our space first. 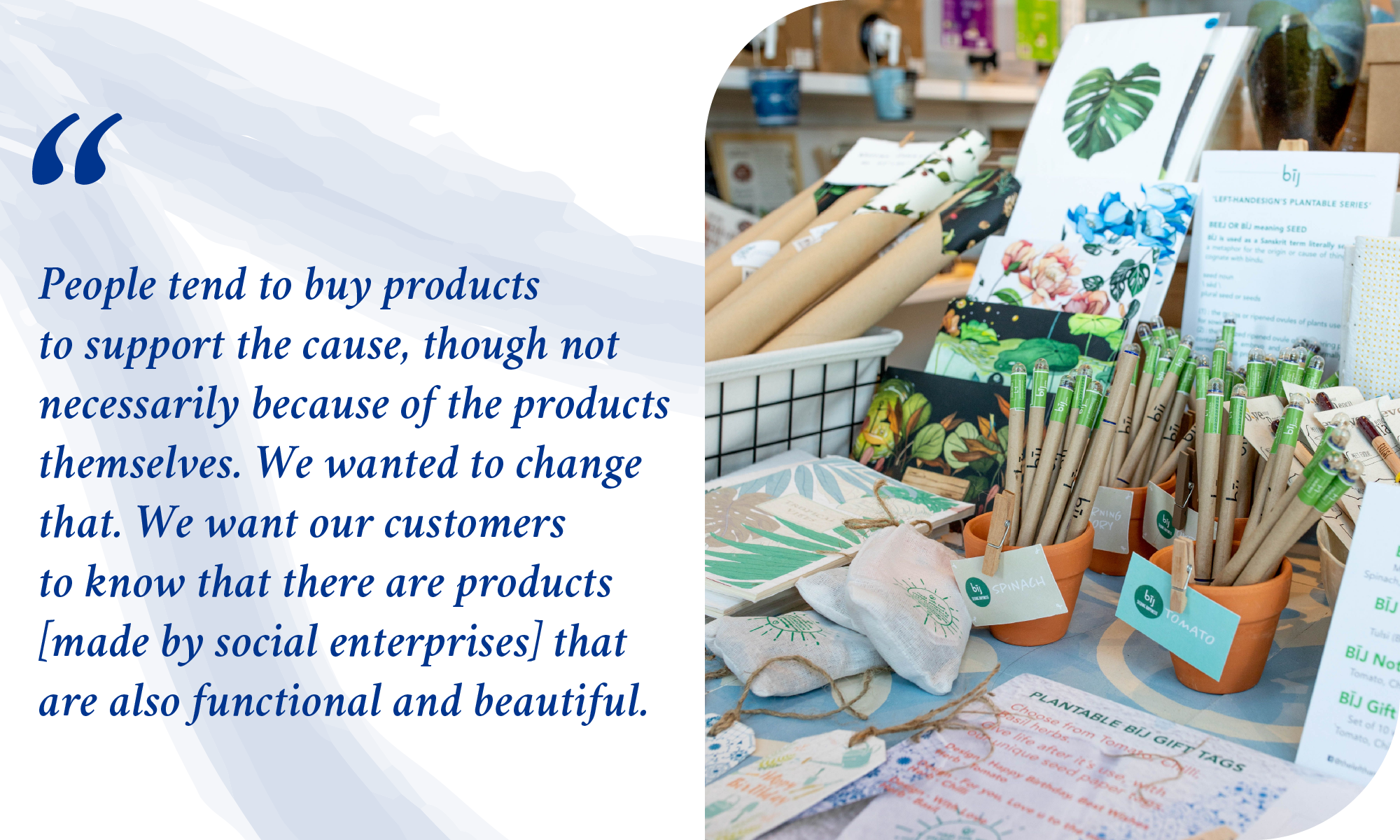 How do you discover the brands you work with?

Cheryl: That process has evolved as well. When we first started, we reached out to them and did a lot of research. As much as possible, we try to meet the owners and visit their workshops. Right now, our customers and friends are the ones who are recommending brands to us. It's now almost like a crowdsourcing process. We had to turn away brands with good products because they don’t have a social angle and vice versa. But if we see potential, we will definitely work with the brands and give them feedback.

How do you guys spend your time off? Do you even have time off?

Cheryl: (laughs) Not for a while.

Cheryl: I now can manage to start my day a little later. I will usually walk my dog in the morning before going to work. But this is something that I only started doing recently!

Daniel: Yeah, I think we’ll be lucky if we can go for lunch. I think that’s our only break.

Cheryl: We try to plan days off off, but something always happens. One of our staff may not show up. So, if we have a good day where all our team members show up and everything is going great, then we try to sneak off for lunch. If not, we don’t get lunch at all. For us, to be able to go out and have a sit-down meal is a luxury… at least for now.

Daniel: Starting a business is not for everyone. I don’t know if Cheryl feels the same way. I don't think I could have done this with anyone else but her. We’re always busy, but for now, we accept that this is our life. 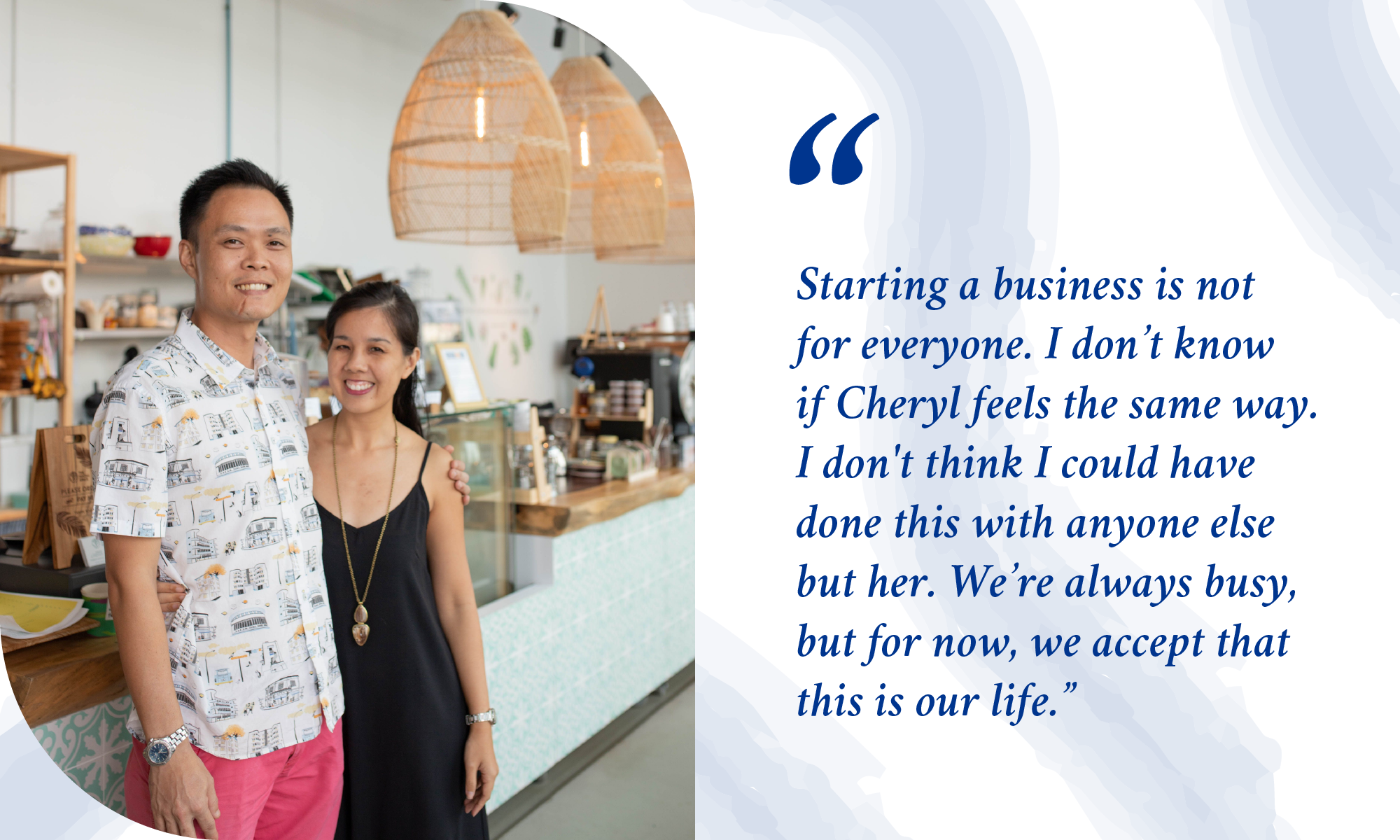 Can you share with us how you built your team?

Daniel: The fact is, turnover in F&B is very high. There aren’t any actual laws dictating the percentage of beneficiaries a social enterprise has to hire, but we've tried to stay true to our mission.

We started off wanting to begin everything from scratch, and to have a team made up of 100% beneficiaries. We wanted to train our beneficiaries and promote them internally so they could become supervisors, managers, and so on. But to keep the business running, we realised it wasn’t feasible. Right now, we’re at a sweet spot: 70% to 80% of our staff are beneficiaries.

For us, the most important thing [for anyone wanting to join our team] is to have a little bit of heart. We don’t necessarily need people who have 5 years of F&B experience ― I mean, I come from a corporate background ― we need people with heart.

Finding a good manager was a challenge. We’ve had managers who came with all the right qualifications, but didn’t have the heart for the job. We realise that the most important qualification is to have empathy.

The team that we have now is great. They are really the people who’ve stayed with us through very, very difficult times. We’ve become almost like family and everybody is here to support one another.

What are some of your favourite products that you carry?

Cheryl: One of the local brands that I love is Rehyphen. Right now, the buzzwords are upcycling, eco-friendly, and zero-waste, but what Rehyphen does is so innovative! They take something that everybody knows — old cassettes — and turn them into art pieces. I also love how they have evolved. At the start, they only took out the tapes to weave into maps. They realised that once the magnetic stripes were taken out, the cassettes were simply thrown away, so they actually came up with a new product to utilise the leftover casings.

Daniel: Indosole was one of the brands that we encountered in Bali. They’re really progressive. They make footwear from recycled tyre waste!

Cheryl: Ketemu Project is also very special to us. Not just because of what they do, but also because they’ve been with us from the start. When my partner pulled out, we were living in Bali, and were already friends with founders Sam and Kabul.

Daniel: Yeah, our relationship actually started because I was collecting Kabul’s work. When we visited his workshop, it was a discovery for us. They weren’t just artists, but also hosted a lot of workshops for people with mental illness in Indonesia. It’s an issue that’s not widely publicised. Knowing how people with mental illness are treated there, and how they were working to help these guys… we definitely learned a lot from them.

They are constantly evolving as well. One of the things that we carry from them is these “Listen Colourfully” cups. These are actually the second edition of these cups. So, when we first commissioned the cups, the first batch that he sent came in an earthy, natural glaze. We were shocked. When we asked him, he told us that he got carried away and he actually painted the cups with sands from the Sanur beach, which was where he grew up. (laughs) For the second batch, we gave him some feedback and he was very responsive.

In a way, our relationship with Ketemu reflects how we work with the brands that we carry. It’s not just about carrying their products. It’s also about learning together and helping them create better products that are more commercially viable. 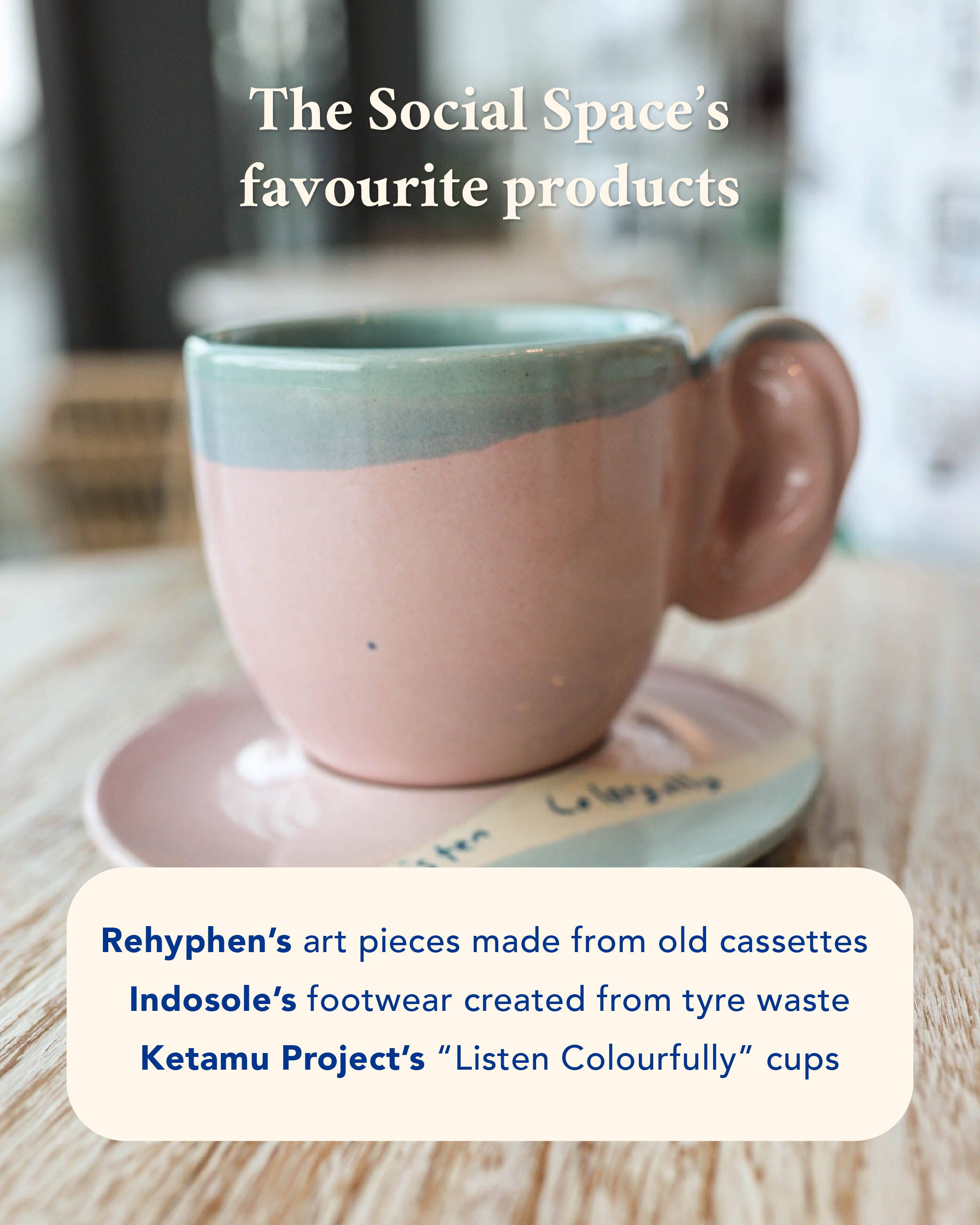 How do you discover the brands you work with?

Cheryl: That process has evolved as well. When we first started, we reached out to them and did a lot of research. As much as possible, we try to meet the owners and visit their workshops. Right now, our customers and friends are the ones who are recommending brands to us. It's now almost like a crowdsourcing process. We had to turn away brands with good products because they don’t have a social angle and vice versa. But if we see potential, we will definitely work with the brands and give them feedback.

Daniel: Rest is a luxury, but sleep is important. Coming home, putting the AC on, and lying in bed ― I look forward to that every day.

Cheryl: Yeah, actually we’ve been sleeping a lot better these days! Now, when we go back and hit the bed, we’ll pass out immediately.

#SundaySleepClub is popping up at The Social Space - Marina One from now till September 3rd, 2019. Help us reduce textile waste by dropping off your old bedding in our textile recycling bin. As our way of saying thanks, you'll receive a 10% off your next online purchase on us.

Pillow Talk is an interview series done in collaboration with Public Culture, an editorial experience studio that believes in connection over communication.